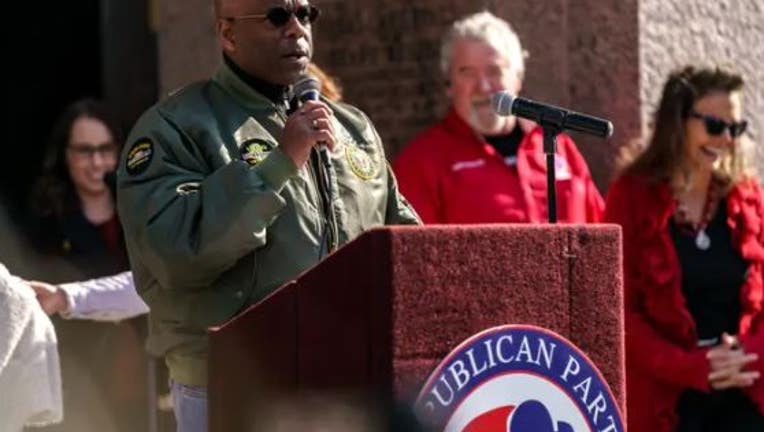 Allen West speaks at a Texas Republican Party rally at the state Capitol in January. On Saturday the former state GOP chair and current gubernatorial candidate reported that he is receiving treatment for COVID-19. Credit: Jordan Vonderhaar for The Te

Texas Republican gubernatorial candidate Allen West, who is not vaccinated against COVID-19, tweeted on Saturday that he may be admitted to the hospital after a chest X-ray showed he has pneumonia caused by the virus.

"There’s a concern about my oxygen saturation levels, which are at 89 and they should be at 95," West tweeted, adding in a follow-up tweet, "My chest X-rays do show COVID pneumonia, not serious. I am probably going to be admitted to the hospital."

Earlier in the day, West’s campaign tweeted that his wife, who is vaccinated against COVID-19, had tested positive for the virus on Friday. In that tweet thread, the campaign said he was "experiencing a low grade fever and light body aches" and that he was canceling in-person events until he was in the clear. In the same thread, the campaign also said that West was taking hydroxychloroquine and ivermectin.

The U.S. Food and Drug Administration has said both drugs can cause serious health problems for people who take the drugs to attempt to treat COVID-19.

Hydroxychloroquine is an anti-malaria drug that the FDA has said has "no benefit for decreasing the likelihood of death or speeding recovery." Ivermectin is a drug used to treat parasites in humans and animals; the FDA has said that "Currently available data do not show ivermectin is effective against COVID-19."

West’s campaign said in the tweets that he believes getting vaccinated against COVID-19 should be a personal choice.

On Oct. 7, West tweeted a photo from an event he attended for Mission Generation, an evangelical organization, in Seabrook, outside of Houston, describing it as "a packed house." The two photos West shared depicted attendees without masks.

West represented Florida in Congress from 2011 to 2013 before moving to Texas in 2014 to become the CEO of the National Center for Policy Analysis, a Dallas think tank that shuttered three years later.

Last year, West was elected to be the state party chair, a position he resigned in June to challenge Gov. Greg Abbott in the Republican primary next year.

The Texas Tribune is a nonpartisan, nonprofit media organization that informs Texans — and engages with them – about public policy, politics, government, and statewide issues.