BESSIMER, Ala. - The vote on whether or not to unionize nearly 6,000 workers at an Amazon warehouse in Alabama ended Monday. Now the vote count begins in the biggest labor push in the online shopping giant's history, which could also have broad implications for labor nationwide.

Employees at Amazon’s fulfillment center in Bessemer, Ala., a suburb of Birmingham, began mail-in voting in early February. Ballots must have been received by the end of the day Monday. But it could be a while before the results are known.

On Tuesday, the National Labor Relations Board starts counting, though it could take days or longer to tally all the votes — depending on how many are received. A majority of voters must vote "yes" in order to form a union.

Amazon or the union could also contest votes for various reasons, which could prolong the count. 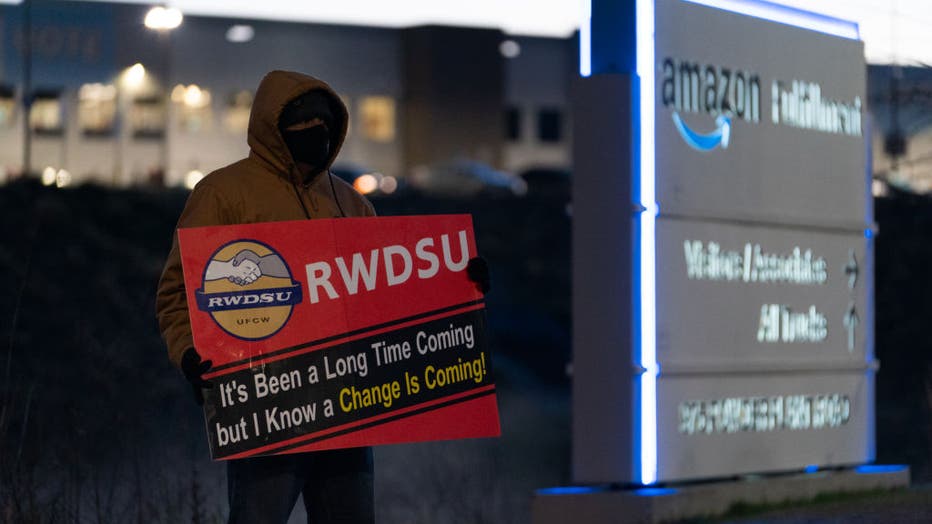 BESSEMER, AL - MARCH 29: A Retail, Wholesale and Department Store Union union rep holds a sign outside the Amazon fulfillment warehouse at the center of a unionization drive on March 29, 2021 in Bessemer, Alabama. (Photo by Elijah Nouvelage/Getty Ima

Amazon, the second-largest private employer in the country, has a history of crushing unionizing efforts at its warehouses and its Whole Foods grocery stores.

Some Amazon workers have unionized in Europe, but the company has managed to fend off unionization in the United States. In 2014, a small group of mechanics and technicians at a Delaware site voted against a plan to join the International Association of Machinists and Aerospace Workers.

RELATED: 6,000 Amazon workers in Alabama to vote on forming first US union in tech giant’s history

The push to unionize comes as Amazon has faced a surge in demand during the coronavirus pandemic, with many turning to the online shopping behemoth for groceries, supplies and other items online. It is one of the few companies that have thrived during the outbreak, bringing in record revenue and profits in 2020 — even though it also spent $4 billion on cleaning supplies and to pay workers overtime and bonuses.

Here’s what to know about the unionization effort in Bessemer, Alabama:

What do the union organizers want?

They want Amazon to give warehouse workers higher pay, more break time and to "be treated with dignity and respect," among other things. Many complain about their 10-hour workdays with only two 30-minute breaks. Workers are on their feet for most of that time, packing boxes, shelving products or unpacking goods that arrive in trucks.

One worker in Bessemer who recently testified at a Senate hearing described the work as "grueling" and said workers are tracked throughout the day and could be punished or fired for taking more break time.

In job postings, Amazon describes the warehouse jobs as a "fast-paced, physical position that gets you up and moving."

"Having a union at Amazon would give us the right to collectively bargain over our working conditions including items such as safety standards, training, breaks, pay, benefits, and other important issues that would make our workplace better," a website in support of unionizing Amazon's Bessemer workers states.

"Amazon sometimes addresses issues at work but it’s all temporary. A union contract is in writing, negotiated upon, and Amazon would need to legally follow the guidelines and there are mechanisms to hold them legally accountable to us as workers," the website adds.

What is Amazon’s response to the unionization effort in Alabama?

Amazon argues the warehouse, which opened in March 2020, created more than 5,000 full-time jobs in Bessemer with an average pay of $15.30 per hour — more than twice the minimum wage in Alabama. Workers also get benefits including health care, vision and dental insurance without paying union dues, the company said.

"We work hard to support our teams and more than 90% of associates at our Bessemer site say they would recommend Amazon as a good place to work to their friends," an Amazon spokesperson said in the statement in January.

"We don’t believe the (Retail, Wholesale and Department Store Union) represents the majority of our employees’ views. Our employees choose to work at Amazon because we offer some of the best jobs available everywhere we hire, and we encourage anyone to compare our total compensation package, health benefits, and workplace environment to any other company with similar jobs," the statement added.

Amazon has been pressing workers to vote against the union. At the Senate hearing, one worker testified that the company hung anti-union signs throughout the Bessemer warehouse, including inside bathroom stalls, and also holds mandatory meetings for workers about why the union is a bad idea. It has created a website for employees that tells them they’ll have to pay $500 in union dues a month, taking away money that could go to dinners and school supplies.

However, Alabama is a "right-to-work" state, which allows workers in unionized shops to opt-out of paying union dues even as they retain the benefits and job protections negotiated by the union.

Why is this unionization push at Amazon happening now?

Labor historians point to two main reasons, the first being the pandemic: Workers feel betrayed by employers that didn't do enough to protect them from the virus.

The Seattle-based company has come under intense scrutiny from employees and lawmakers over worker safety, calling for more transparency related to COVID-19 figures. Last year, workers expressed their grievances against Amazon through protests and strikes. More than a dozen state attorneys general also signed a letter in May requesting detailed information on what measures Amazon has taken to strengthen its worker protection policies.

In a corporate blog post, Amazon said it had assembled a team of experts to lead an initiative focused on testing Amazon employees for COVID-19. In October, the company released data on its employees’ infection rates for the first time after calls to do so. It reported nearly 20,000 of its front-line U.S. workers had tested positive or been presumed positive for the virus.

A look at Amazon during the COVID-19 crisis

As the world faces the impacts of the coronavirus pandemic, so too does the world’s largest retailer, Amazon.

The second reason experts say the union push is happening now is a result of the Black Lives Matter movement, which has inspired people to demand to be treated with respect and dignity.

Most of the workers in the Bessemer warehouse are Black, according to organizers.

What happens if Amazon workers in Alabama vote to unionize?

If a majority of workers vote "yes," Amazon would need to start negotiating a contract with the New York-based Retail, Wholesale and Department Store Union, which is leading the organizing efforts for Bessemer warehouse employees.  The union represents 100,000 workers at poultry plants; cereal and soda bottling facilities; and retailers such as Macy’s and H&M.

But Amazon could stall contract negotiations and both sides could launch legal actions, delaying the process.

A union win in Bessemer does not mean a union win at the more than 230 other Amazon warehouses spread across the country. Each warehouse that wants to unionize would have to go through a similar process.

But if organizers succeed in Bessemer, it could inspire workers in other parts of Amazon to try as well. Even if organizers lose, the fact that the union push got this far in a right-to-work state could encourage workers in states with more lenient labor laws to mount a similar effort.

Amazon employed nearly 1.3 million workers worldwide at the end of last year, making it the second-largest private employer behind retailer Walmart. Amazon hired 500,000 people last year alone to keep up with a surge of online orders during the pandemic.

Earlier this year, a small group of employees at Google and its parent company Alphabet announced they had formed a union, creating a rare foothold for labor organizers in the tech industry.