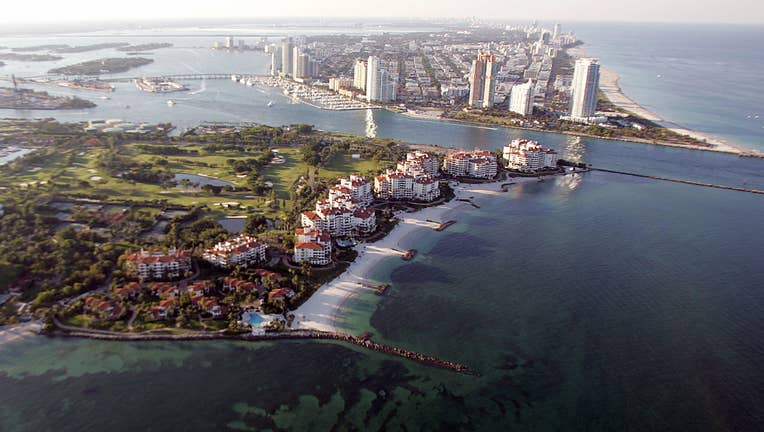 MIAMI, UNITED STATES: Aerial view of the exclusive Fisher Island residential compound (L) with a view of the southern tip of Miami Beach, Florida, 24 April 2005. According to the US Census Bureau, Miami's population in 1900 was 1,700 people, currentl

Fisher Island Community Association, the main homeowner’s association on Fisher Island, announced last week it had been granted the loan request submitted at the beginning of April.

But the prospect was shot down by residents who voted to return the money to the government, Fisher Island resident Matthew Barnes said in an email to FOX Business.

Related: DeSantis says reopening Florida economy will be 'slow and steady,' but no timeline yet

“Fisher Island’s [homeowners’ association] fees alone are around $30,000 [per] year. Some of this fee covers private ferry service to take us to our homes,” Barnes said in a statement. “So I think to myself, wait, is it the right thing to do to take $2,000,000 from the government, much of which we wouldn’t have to repay… to help cover the costs of our private ferry to our home and staff to clean our pools? Well the answer is simply no.”

A FICA spokesperson did not immediately respond to FOX Business’ request for comment.

The Herald was also first to report the news that FICA had considered applying for – and was later approved for – the Small Business Association’s Paycheck Protection Program loan.

The PPP loan gives grants to businesses with fewer than 500 workers so that they can maintain payroll and pay rent while shutting down their businesses during social distancing edicts.

None of the 130 union employees who work for the association had been laid off amid financial concerns caused by the coronavirus pandemic, a union spokesperson previously told the outlet.

Barnes said residents voted on Friday, with roughly 4 percent of votes to keep the money, while 9 percent said they wanted to send it back and the remaining 86 percent kept their opinions to themselves. The final vote to shoot down the money was executed on Friday.

It was not immediately clear what the association had planned to do with the money if residents had voted to take it.

The Associated Press contributed to this report. Read updates at FOXBusiness.com.