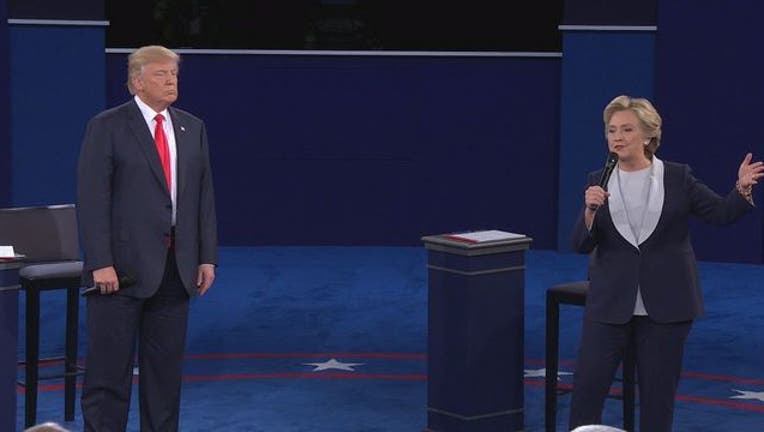 WASHINGTON (AP) — It was a presidential debate, wounded animal edition.

Bleeding supporters and running out of time, Donald Trump fought and clawed his way through his second debate with Democrat Hillary Clinton. In the process, he gave his base of die-hard supporters the performance they've long wanted, but offered little for the broader audience of Americans still resistant to a Trump presidency.

In a 90-minute encounter filled with insult and interruption, Trump employed every tactic available to try to move past the campaign-rocking video that had sent his bid into freefall 48 hours earlier. He showed little contrition and no restraint. He diverted attention to the sex scandals in Bill Clinton's past. He went stunningly personal, claiming to see "tremendous hate" in his opponent's heart, referring to her as "the devil" and a liar and declaring that, if elected, he would put her in jail.

His maneuvering spared no one— not even his Republican vice presidential nominee or his own party.

"I am so disappointed in congressmen, including Republicans, for allowing this to happen," he said, criticizing GOP lawmakers for their handling of the investigation into Clinton's handling of classified email.

The performance was a vivid display of what has made Trump an unstoppable force in American politics for 15 months. The New York businessman gave voice to long marginalized complaints about Clinton and her husband. He showed he would not be cowed by the crisis or restrained by the conventional norms of civility.

Republicans hoping their badly damaged nominee might take himself out of the race were reminded they should not hold their breath.

Clinton met Trump's wrath with dismissive smiles and eye rolls. She began the debate in St. Louis quoting first lady Michelle Obama: "When they go low, you go high." When Trump repeatedly interrupted her, Clinton chose not to protest — hoping to let her opponent hang himself with his words.

But her strategy was arguably less effective than in their first outing. When the conversation turned to taxes, Washington politics culture or Clinton's handling of classified email as secretary of state, Trump was able to land some punches and build some momentum.

For debate watchers not primed for the battle by conservative radio and media, it was hard to see what new — on either policy or personal trust — Trump presented. His campaign was already trailing badly with women voters before the video in which he can be heard describing his predatory groping of women. Winning over those voters likely begins with a moment of uncharacteristic humility or candor.

But Trump's dismissive remarks on the episode on Sunday — "Certainly I'm not proud of it. But this is locker room talk." — changed little from the statement he gave Friday night, even though several Republican leaders deemed it insufficient then and publicly abandoned his campaign.

And, although Republican leaders have urged him not to, the candidate could not be deterred from raising the Clinton sex scandals of the 90s in his defense. With typical showmanship, he gathered three women who have accused Bill Clinton of unwanted sexual advances and sat them in the front of the town-hall style forum.

Trump offered no new policy proposals, or new fluency with issues such as health care or national security. Confronted with contradictions in his position and Indiana Gov. Mike Pence's comments on whether the U.S. should be ready to use force to protect civilians in the war in Syria, Trump bluntly rebuked his running mate.

"He and I haven't spoken, and I disagree. I disagree," Trump said.

In some respects, Trump's target audience was not average voters but Republican Party leaders, who are in the remarkable position of deliberating whether to continue spending money and time trying to elect their own nominee. It's unclear whether Trump's performance helped on that front — although no more GOP officials publicly disavowed him in the immediate aftermath of the debate.

GOP leaders weighing that decision — including calculations about Trump's impact on their prospects for holding the Senate — can be sure he won't go quietly.

Asked to name something they admire about each other as ended their sparring, Trump declared he respected Clinton perseverance. "She doesn't quit," he said.