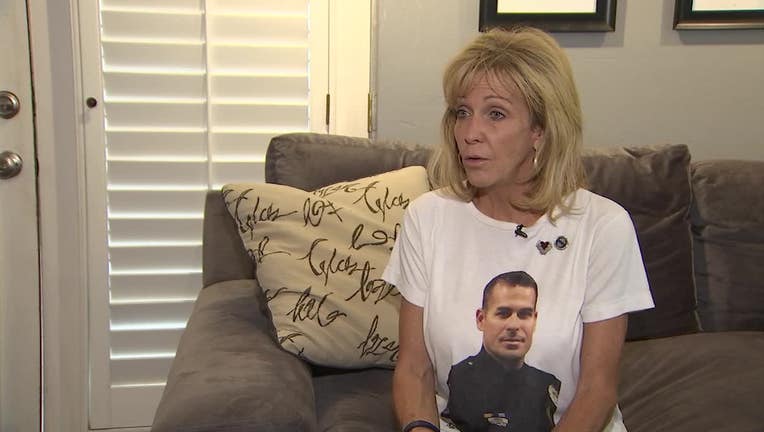 PHOENIX - FOX News has confirmed that Mary Ann Mendoza, a Mesa mother who became outspoken on the issue of illegal immigration following her son's death, will no longer speak at the Republican National Convention following an antisemitic controversy on Twitter.

In the hours prior to her now-cancelled speech to the RNC, Mendoza was embroiled in further controversy, apologizing for retweeting a "very long thread" without "reading every post within the thread."

According to reports by The Daily Beast, the tweet was linked to a lengthy thread from a QAnon-linked conspiracy theorist who laid out a view of the world that is anti-Semitic.

"The thread also promoted 'The Protocols of the Elders of Zion,' an anti-Semitic hoax popular in Nazi Germany, and claimed that its allegations about a Jewish plot to control the world are real," read a portion of the report published by The Daily Beast.

According to Trump campaign spokesperson Tim Murtaugh, the video featuring Mendoza has been removed from the convention lineup, and it will no longer run this week.

Mendoza has been in trouble on social media before.

In 2019, FOX 10 reported that Twitter officials accused Mendoza of using hate speech in six tweets, and will not unlock her account until she deletes them. The tweets were reportedly all directed at lawmakers, and made reference to Mendoza's displeasure of the way they were handling issues at the border.

At the time, Mendoza says she's not backing down.

"I refuse to remove those posts," said Mendoza, who also said at the time that she may take legal action against Twitter.

On August 20, it was reported that group founder Brian Kolfage, Advisory Board Chairman Stephen Bannon, and two others identified as Andrew Badolato and Timothy Shea were arrested and indicted on federal charges for wire fraud and money laundering.

Prosecutors with the Southern District of New York allege that Bannon received more than $1 million through a non-profit organization under his control. They claim that as least some of that money was used to cover hundreds of thousands of dollars of his personal expenses.

They say that Kolfage covertly took more than $350,000 in donor funds. The indictment claims the payments to Kolfage were routed through a non-profit and a shell company under Shea's control.

Mendoza is not among the four people arrested or indicted. As recently as August 20, Mendoza listed herself as a consultant for We Build The Wall, based on an archive of her Twitter page on the Wayback Machine. References to her consultancy have since been removed.

Mendoza, who is from Mesa, was the mother of Brandon Mendoza, a police officer who died in a crash involving a wrong-way drunk driver who was in the country illegally.

In 2018, Mendoza, along with other families who have lost loved ones due to incidents or crimes involving undocumented immigrants, attended an event at the White House, even as family members of Mollie Tibbetts and Kate Steinle opted to not participate in the event.

“You are going to know somebody – a friend, a family member who is going to be affected by illegal [immigrant] crime in the future," said Mendoza at the time. "It’s important that our fellow Americans know the magnitude of crimes that are being committed.”