Police in Montgomery County are investigating an act of antisemitic vandalism at a Bethesda high school, as officials from around the county condemn the act. FOX 5's Nana-Sentuo Bonsu has the latest details on the incident.

BETHESDA, Md. - Police in Montgomery County are investigating an act of antisemitic vandalism at a Bethesda high school, as officials from around the county condemn the act.

According to the Montgomery County Police Department, the graffiti was discovered outside of Walt Whitman High School around 8:04 a.m. on Saturday.

Police say the graffiti was painted on the sign board out front of the school, located at 7100 Whittier Boulevard. 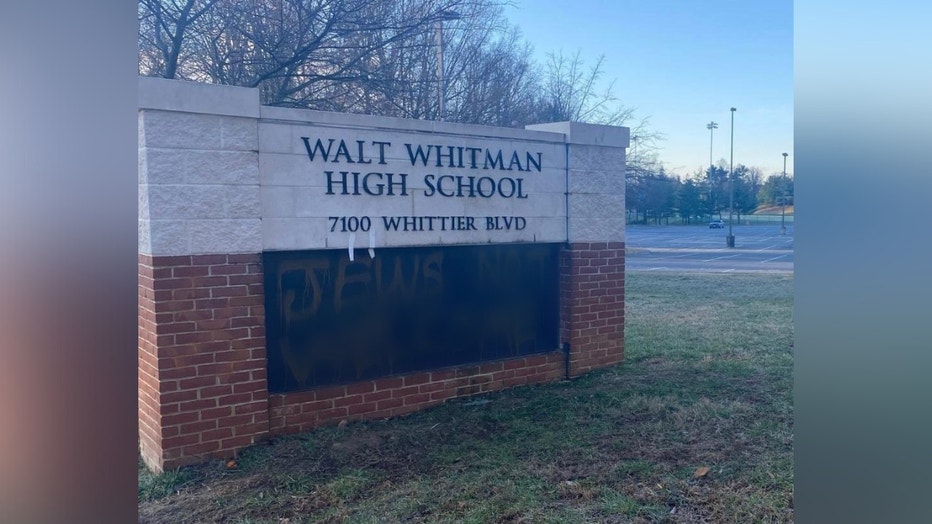 A picture from the scene shows the words "Jews Not Welcome" scribbled across the board. An image of the scene later on Saturday showed that the graffiti had been covered.

The letter adds that school officials immediately reported the graffiti to police. Dodd also asked parents to talk to their children "about respecting and showing acceptance to all people and demonstrating understanding of our differences. Please help them understand the impact that intolerable symbols, words, and actions have."

You can read the full letter from Dodd below:

I want to share information with you regarding an incident that took place today and how it is being addressed. It was reported, this morning, that there was antisemitic graffiti; the words "Jews Not Welcome," written on our school sign. This behavior is abhorrent, extremely hurtful, and will not be tolerated at Walt Whitman High School.

We immediately notified the Montgomery County Police, who are actively investigating the incident.In addition, if found to have been committed by an MCPS student, this incident will be addressed as a disciplinary matter in accordance with the Memorandum of Understanding with county police and in alignment with the MCPS Student Code of Conduct. We commend the individuals who reported this incident of hate and encourage any student or community member with additional information to contact our school administration, the Montgomery County Police non-emergency line at 301-279-8000, or anonymously through the Maryland Safe Schools Tip-Line at 1-833-632-7233.

Walt Whitman High School will continue to use education and restorative practices to engage our students in conversations about respecting and celebrating our diverse community. This past Wednesday (12/14/22) leaders of the Walt Whitman High School Jewish Student Union, in collaboration with staff members, led our school through a OneWhitman lesson on confronting anti-Semitism. All students engaged in this learning and heard student testimonies to the Jewish student experience at Walt Whitman High School. While we are deeply disturbed and disappointed by what occurred today, it will not deter us from our collective mission to end antisemitism and intolerance and build a safe and inclusive school community where ALL students can thrive.

If your child is impacted by this unacceptable behavior, our counselors, administrators, and mental health professionals are available to support them. Our students expect and deserve a safe school environment in which to learn and develop. We remain steadfast in our commitment to foster an anti-biased school culture and eliminate hate in all its forms. We appreciate your support as we confront incidents like these and work toward creating a community which preserves the dignity of all people.

If you have any questions, or would like to discuss this further, please call the main office at 240-740-4800.

"We are disgusted and angry to learn about yet another display of hate targeting the Jewish community in Montgomery County. Our nation continues to experience a deeply troubling rise in antisemitism, and we must continue to join together to denounce these acts of hate here at home. The Council stands in solidarity with our Jewish community and condemns all acts of hate and religious bigotry. Recently the Council unanimously passed a resolution reaffirming our commitment to address antisemitism and protect our Jewish community from these awful acts of hate. These acts are not only a desecration of public spaces but hurtful and damaging to the entire Montgomery County community. The Council extends its gratitude to the Montgomery County Police Department (MCPD) for their active investigation and Montgomery County Public Schools for their swift response and clean-up. Everyone is welcome in Montgomery County. We must continue to forcibly speak out to combat discrimination, hate and violence in all its forms. We will continue to do all we can to make it clear that hate has no place in our community. We ask all residents with knowledge or information about hate crimes to contact MCPD immediately."

Montgomery County Public Schools also released a statement about the graffiti saying the school system is "deeply disturbed and saddened by the antisemitic graffiti found outside of Walt Whitman High School."

In a separate statement, MCPS Superintendent Dr. Monifa B. McKnight released the following statement about the graffiti:

"MCPS is deeply disturbed and saddened by the antisemitic graffiti found outside of Walt Whitman High School. MCPS’ mission is to foster an inclusive and welcoming environment that celebrates the diversity of our global community and all cultural backgrounds. This hurtful behavior, along with any acts of discrimination, have no place in our school community and will not be tolerated."

These incidents come on the heels of the graphic hateful graffiti found on the Bethesda Trolley trail just weeks ago. Antisemitic vandalism and graffiti were also recently reported at the Rock Creek Park trail in Washington.

While these specific acts do not indicate any increased direct threat to our community, it is important that any acts of hate be reported immediately to ensure rapid municipal response and remediation. Incidents may be reported to our partners at Secure Community Network.

As organizations on the front lines and working together to combat this hatred, we feel our community’s increasing alarm and fear. Our region is known for celebrating and respecting diversity and is home to one of the largest Jewish populations nationwide. We cannot normalize or become inured to the proliferation of such heinous acts."

Police say investigators are working to obtain images of possible suspects related to the case.

This is the second incident of anti-Semitic graffiti being found in the Bethesda area in recent weeks. In November, officials discovered Antisemitic red graffiti near the Trolley Trail in Bethesda.

To report an incident of hate bias to Montgomery County Police click here.