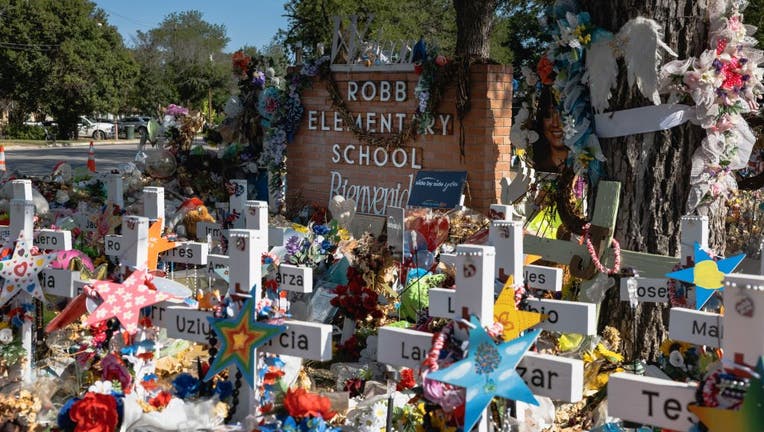 UVALDE, TX - JUNE 24: The memorial for the massacre at Robb Elementary School on June 24, 2022 in Uvalde, Texas. Nearly 300 Uvalde High School seniors received their diplomas one month to the day after nineteen children and two adults were killed at

The Associated Press and other news organizations are suing officials in Uvalde, Texas, after months of refusal to publicly release records related to the May massacre at Robb Elementary School.

The lawsuit filed Monday in Uvalde County asks a court to force the city, school district, and sheriff's department to turn over 911 recordings, personnel records, and other documents. Newsrooms have requested them under Texas open records laws since a gunman killed 19 children and two teachers on May 24.

More than three months after one of the deadliest classroom shootings in U.S. history, news organizations have turned to courts in an effort to obtain information and records that Uvalde officials and state police have argued they cannot release because of ongoing investigations. The Texas Attorney General's Office has also ruled that Uvalde officials cannot withhold all records.

Misleading and outright false statements by authorities about the police response in the initial hours and days after the attack on a fourth-grade classroom — which lasted more than 70 minutes — have sowed distrust that remains among many Uvalde residents.

"The obfuscation and inaction have only prolonged the pain of victims, their families and the community at large, all of whom continue to cry out for transparency regarding the events of that day," the lawsuit states.

A spokeswoman for the city of Uvalde said it had not been served a copy of the lawsuit and declined comment. Representatives for the school district and sheriff’s office did not immediately respond to requests for comment.

Uvalde officials, including Mayor Don McLaughlin, have previously cited ongoing investigations in their defense of the city continuing to withhold some records. The city has released some body camera footage from Uvalde police that show officers from multiple agencies in and outside the school during the attack.

The fullest account of the shooting has so far come from a report from a Texas House investigative committee that found wide failures by nearly 400 officers who rushed to the scene but waited more than an hour to confront the gunman. The report, released in July, also noted that Uvalde families had "already waited too long for answers and transparency."

The Texas Department of Public Safety, which had more than 90 officers at the scene, has also denied public records requests since the shooting.