Video of the incident in Ohio shows the woman resisting as the officer struggles to handcuff her for nearly two minutes before he deploys his Taser. Video credit - Tiffany Kennedy via Storyful

LOGAN, Ohio - Widely-shared video captured tense moments at an Ohio middle school football game where a woman was arrested on a criminal trespassing charge and a stun gun was used on her following requests to put on a mask.

A stun gun was used on the woman after she wouldn’t leave the football stadium in Logan in southeastern Ohio Wednesday, the Logan Police Department said in a news release.

The woman, identified as Alecia Kitts, told police she had asthma and wouldn’t be wearing the mask, according to the department. But Kitts was arrested on a criminal trespassing charge and not for refusing to wear a mask, the agency added.

A school resource officer was working “special duty detail” requested by the Logan Hocking School District “to help ensure the safety of the fans and athletes during their inside and outside sporting events,” the department said.

Those duties include making sure fans are complying with guidelines by the U.S. Centers for Disease Control and Prevention, the Ohio Athletic Association and the Logan Hocking School District.

“One of these policy guidelines mandated by the Logan Hocking School District is that all spectators must wear a mask while on school property,” the department said.

The mask-wearing requirement was widely publicized both before the game and as spectators entered, Logan-Hocking Schools Athletic Director Theresa Schultheiss told The Marietta Times.

“Officer (Chris) Smith advised the female several times that she needed to put her mask on, and that if she did not, she would be asked to leave and would have wait outside the stadium. The female continually refused his request and Officer Smith advised her that if she refused to leave, she would be cited for trespassing and escorted off the property,” the police department said.

A more than 3 minute-long video captured part of the incident, which shows Kitts being handcuffed and a stun gun being used by the officer, before she is lead out of the stadium. It was posted on Facebook by a witness at the game.

“After several attempts to get her to leave, Officer Smith advised her she was under arrest for criminal trespassing and asked her to place her hands behind her back multiple times and she refused. Officer Smith attempted to place her hand behind her back, the female began resisting by pulling away from the Officer and another female began interfering with the arrest,” the department said.

The police department said Smith “advised (Kitts) to comply or he would deploy his Taser if she did not quit resisting.”

“She continued to resist, and Officer Smith placed his Taser on her shoulder area and drive stunned her once. He was able to successfully handcuff the female at that time. An additional officer arrived and assisted in walking the female out of the stadium,” the agency said.

“Once she refused to leave the premises, she was advised she was under arrest for criminal trespassing, she resisted the arrest, which led to the use of force,” the statement concluded. “This is an unfortunate incident for everyone involved. The incident remains under investigation.” 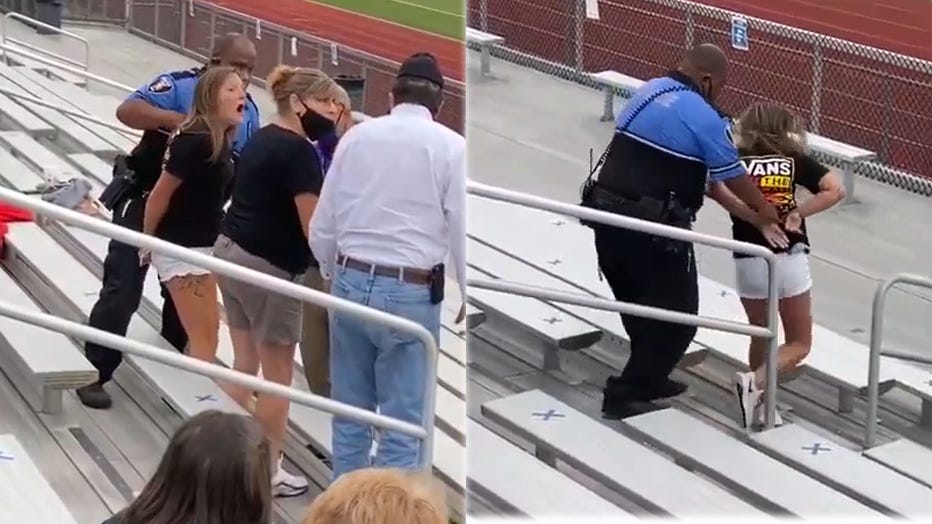 DeWine used his twice-weekly news briefing on Thursday to caution people against judging the actions of the police department and the school. He said the incident was the only in the state he was aware of.

The Republican said times are tense, with the presidential election in the final stretch, some people frustrated by the statewide mask order, and others angry with the outcome of investigations into police shootings of Black people, including Wednesday’s decision in Louisville not to charge officers directly in the fatal shooting of Breonna Taylor during the execution of a warrant.

School officials were following guidelines set out by the Ohio Health Department and the state’s high school sports athletic association with the sole goal of having students play sports again, the governor said.

“Before you just look at the video, look at what led up to that video, and I think that you’ll get a full picture of what happened,” DeWine said. “Very unfortunate, very unpleasant to look at. No one wants to see that happen. It’s sad when we see something like that.”

The governor’s Aug. 19 order allowing fall sports prohibits spectators at events other than family members or individuals close to athletes, with final decisions on those people left up to schools.