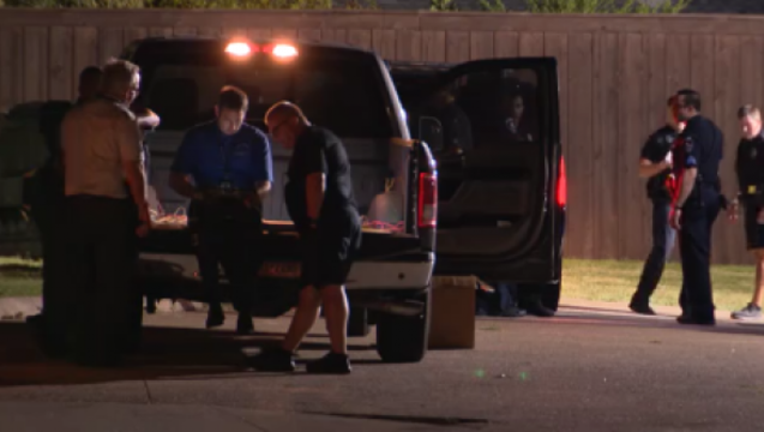 ARLINGTON, Texas - Arlington police shot and killed a suspect who they said pointed a replica BB gun at officers during a domestic dispute situation Saturday night.

According to police, they responded to reports of a man assaulting someone with a baseball bat in the 700 block of Thomas Chapel Drive, just after 6:30 p.m.

The victim suffered head and arm injuries, but was able to leave the home and get away from the suspect.

During their investigation, police tried communicating with the 31-year-old via phone and a public address system, but the suspect refused to surrender.

At 8:01 p.m., police say the suspect opened the front door, walked onto the porch, pulled what looked like a handgun from his waistband, and pointed it at the emergency arrest team.

According to police, three officers then fired their weapons at the suspect, striking him.  He was pronounced dead at the scene.

Investigators later determined that the suspect had displayed a replica BB gun.

The officers who shot the suspect have been placed on standard administrative leave. The identity of the man who was shot and killed has not been released yet.

Arlington officers responded to the same home to investigate allegation of invasive visual recording of a minor child on Friday. At that time, officers determined the suspect, the same person who was killed Saturday, may have been suicidal and transported him to a mental health treatment facility.

That suspect was released from the hospital and returned home before Saturday's shooting.

Police are investigating both the invasive visual recording allegations and the officer-involved shooting.