Rep. Adam Schiff sat down with FOX 11 Los Angeles ahead of Armenian Genocide Remembrance Day, which is commemorated every year on April 24.

April 24 is widely commemorated as Armenian Genocide Day, which observes the massacre of up to 1.5 million Armenians by the Ottoman Empire during World War I.

The events are widely regarded as the first genocide of the 20th century, though no U.S. president had ever formally recognized the killings as such until this year.

President Joe Biden formally acknowledged the events as genocide on Saturday - a move that has generally been avoided out of concern about damaging relations with Turkey.

Why Turkey is so important to NATO?

The U.S. State Department describes Turkey as a key North Atlantic Treaty Organization (NATO) ally and a critical regional partner, but their partnership predates the Republic of Turkey itself.

America first established diplomatic relations with the Ottoman Empire in 1831. And though the two countries fought on opposite sides of World War I, the U.S. rekindled that relationship with the Ottomans’ successor, Turkey, in 1927.

The two nations advanced their relationship further on July 12, 1947, when they signed the Economic and Technical Cooperation Agreement, which implemented the Truman Doctrine and ushered in the policy "to support free peoples who are resisting attempted subjugation by armed minorities or by outside pressures."

A few years later, Turkey joined NATO, cementing its place as a player among Western nations and not just the remnants of a former empire.

NATO came to be on April 4, 1949, as an international military alliance aimed at deterring military action against its members.

In the Cold War, Western nations pledged to support one another should the Soviet Union attempt to expand its borders as it had done in Eastern Europe.

Greece and Turkey joined NATO on Feb. 18, 1952, pushing the alliance closer to the Soviet’s sphere of influence. Both countries control the waterways leading to the Black Sea, which provides Russia with warm-water ports year-round.

Turkey has been especially important since it has sovereignty over the straits of the Bosporus and the Dardanelles — which connect the Black Sea to the Mediterranean and, essentially, the world’s oceans, the State Department said.

Being able to rely on Turkey as an Eastern anchor of NATO has been crucial for decades, but the Turks shared friendlier relations with Russia in recent years — jeopardizing its standing with the West.

How have US-Turkish relations soured in recent years?

In 2017, Turkey brokered a deal with Russia to purchase a $2.5 billion S-400 missile system — which was fiercely condemned by NATO members.

In retaliation, the Trump administration refused to sell F-35 military jets to Turkey. And in the final months of his presidency, the State Department announced sanctions against Turkey, FOX News reported.

Turkey’s President Recep Tayyip Erdoğan had an up-and-down relationship with Trump. The State Department recognizes Turkey’s efforts in combatting terrorist organizations both inside and outside its borders, including the Kurdistan Workers’ Party (PKK).

But Turkey has been accused of using that commitment to bring violence against other Kurdish people.

That situation came to a boil in October 2019 when Trump removed American troops from the Turkey-Syria border, clearing the way for a Turkish offensive against Kurds residing in the area. 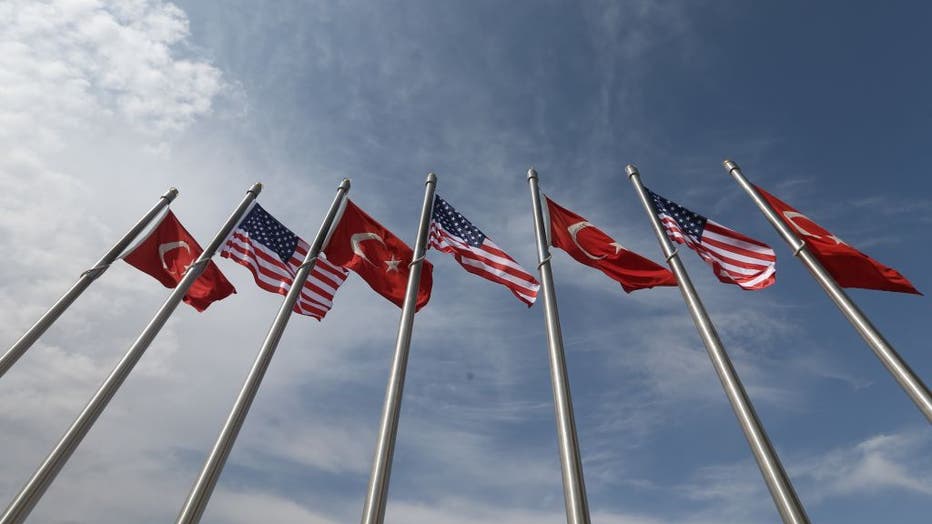 The move drew international condemnation because the Kurds provided ground forces in the fight against the Islamic State of Iraq and Syria (ISIS).

"If Turkey goes into Syria, it is between Turkey and Syria. It’s not our problem," Trump said. "The Kurds know how to fight. As I said, they are not angels."

Russian President Vladimir Putin had a long-standing relationship with Syrian President Bashar al-Assad, who had poor relations with the Kurdish people.

Turkey’s invasion into the region threatened to tighten the relationship among those three nations and widen its rift with the west.

Just a few years earlier, Turkey enjoyed NATO support during a domestic crisis. A faction within Turkey’s military attempted to overthrow the government and Erdoğan on July 15, 2016.

Not surprisingly, the U.S. condemned the failed coup and offered support to Turkey’s elected government. But recent developments indicate Turkey believes the U.S. is offering shelter to a suspected mastermind of the failed coup.

Cleric Fethullah Gulen has been living in Pennsylvania since the 1990s, but Turkey believes he helped orchestrate the coup attempt, the Associated Press reported.

Turkey brought those claims back to the surface after a recent phone call between Erdoğan and President Joe Biden about Biden’s plans to recognize Ottoman violence against Armenians from a century ago as an act of genocide.

Historians estimate that, in the last days of the Ottoman Empire, up to 1.5 million Armenians were killed by Ottoman Turks between 1915 and 1923.

According to the Armenian National Institute, the Ottomans subjected Armenians to deportations, expropriation, abduction, torture, massacre and starvation.

Armenians had long pushed for the deaths to be recognized as genocide, though Turkey has resisted such claims.

Turkey maintains that the death toll is inflated and the deaths resulted from civil unrest during the Ottoman Empire’s collapse. Even the textbooks issued to school children call the genocide a lie and classify the Ottoman actions as necessary measures, the New York Times reported.

Many NATO members and Russia have formally recognized the Armenian killings as a genocide. In 2019, both chambers of the U.S. Congress passed a resolution that effectively did the same.

RELATED: Armenian genocide: What happened, and why Biden’s recognition matters

Even so, no American president had ever formally called the killings a genocide until Biden. It fulfilled a promise Biden made on the campaign trail to recognize the World War I-era killings and deportations of hundreds of thousands of Armenians in modern-day Turkey.

In a speech on April 24, 2020, he used the term "Armenian genocide" and pledged to "never forget or remain silent about this horrific and systematic campaign of extermination."

Armenia commemorates Armenian Genocide Remembrance Day every year on April 24. Many lawmakers and Armenian-American activists had lobbied Biden to make the announcement that he is formally recognizing the killings as genocide on or before that date.

Historians estimate that up to 1.5 million Armenians were killed around World War I, and many scholars see it as the 20th century's first genocide.

More than 100 House members signed a letter — spearheaded by Rep. Adam Schiff, D-Calif. — to Biden calling for the recognition.

"If we aren’t going to recognize a genocide that happened a century ago, what does that say about our willingness to stand up and confront a genocide happening today?" Schiff told FOX 11 Los Angeles.

Recognizing the Armenian Genocide is poised to create yet another rift in the already deteriorating relationship between the NATO allies.

"If the United States wants our relations to get worse, it’s up to them," Turkish Foreign Minister Mevlut Cavusoglu said in an interview with Turkey’s HaberTurk news channel.

Even so, Schiff said Turkey threatens retaliation every April 24 and relations with them should have been a deterrent from recognizing Ottoman violence against Armenians as genocide.

"What we have seen in the past — when Turkey has threatened other nations — they threaten, they cajole, but at the end of the day, when counties do the right thing and they recognize the genocide, Turkey moves on," Shiff said. "That will happen here too."

This story was reported from Atlanta. Kelly Hayes contributed.