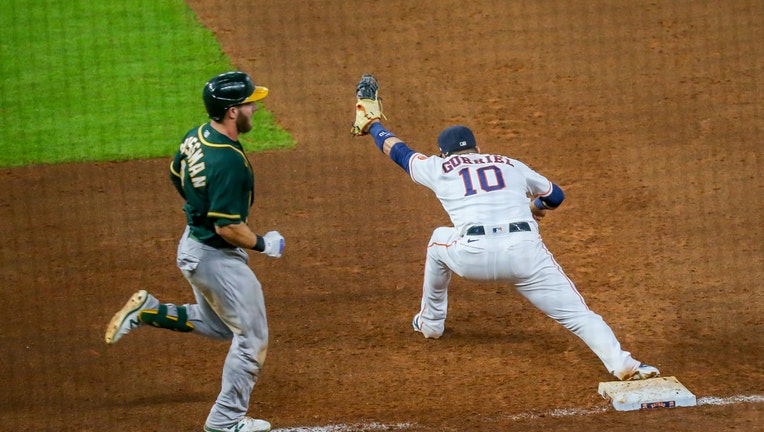 HOUSTON, TX - AUGUST 29: Houston Astros first baseman Yuli Gurriel (10) gets an out on Oakland Athletics left fielder Robbie Grossman (8) in a double play in the top of the sixth inning during the MLB baseball Game 2 between the Oakland Athletics and

HOUSTON - A member of the Oakland Athletics organization tested positive for the coronavirus, causing Major League Baseball to postpone the team's game Sunday against the Houston Astros.

The finale of the A's three-game series at Minute Maid Park was called off less than four hours before the scheduled first pitch.

The A's said the team conducted testing and contact tracing for the entire traveling party Sunday morning at the hotel and would self-isolate in Houston with recommended safety precautions in place. There were no details provided on whether the positive test came from a player, coach or someone else.

Oakland general manager David Forst, who was not traveling with the team, said the A's will stay put until at least Monday morning, with hopes of receiving further test results and determining whether this is "an isolated infection."

"This is our priority right now, making sure our people are healthy and safe," Forst said.

Forst said the A's were informed shortly before 10 p.m. Saturday by MLB there had been a positive result from Friday's regular round of testing. The latest tests are being flown to the MLB-used lab in Utah.

He doesn't know when the A's will play again.

"Anything beyond today, we're not going to speculate on. Ultimately, we need to see if this is an isolated infection or a larger issue," Forst said.

"The last time we were tested was Friday and all of those came back negative," Click said. "So we are doing our testing again this morning, those will be sent to the lab and we should have those results tomorrow. If anybody comes up as a result of the contact-tracing protocols, we will try and find a way to get them rapid-tested."

The Astros beat the A's 6-3 on Saturday night for a doubleheader sweep. They won the first game 4-2. The doubleheader was scheduled after the A's and Astros decided not to play Friday night to raise awareness of racial inequality in the wake of the police shooting of 29-year-old Jacob Blake, a Black man, in Wisconsin.

Houston is scheduled to open a three-game series against the Texas Rangers beginning Tuesday at Minute Maid Park.

If the series goes on as scheduled, the Rangers would occupy the same clubhouse that the A's just used. The clubhouse was cleaned and sanitized Saturday night, Click said, which is a part of the procedures.

"It will undergo an additional deep-cleaning today," Click said. "My guess is we will probably do it again tomorrow. We will do whatever is required by Major League Baseball and the Rangers to make sure that the environment is sanitized before they get in there."

Within the Astros organization, Click confirmed there has been another positive COVID-19 case at the club's alternate training site in Corpus Christi, which is being shut down for contact tracing and deep cleaning. This is the second time the Astros' alternate site has been shut down.

"I think this is more of an indication of just how contagious this virus is," Click said, "If we find out people are breaking protocols, we will obviously have to address that."

Click did not say if it was a player or staff member who tested positive. In the meantime, the Astros are working with Major League Baseball to move the unaffected players to Minute Maid Park to continue their rehab.

Oakland is scheduled to play a three-game series at Seattle starting Tuesday, then return home to host San Diego next weekend ahead of a four-game set with the Astros at the Coliseum, which could provide a potential makeup opportunity.

"We've got a resilient group of guys who have taken this seriously," Forst said. "I have confidence we'll get through this and get back to playing baseball when it's appropriate."

MLB's plan to play a pandemic-shortened 60-game regular season has been interrupted by positive coronavirus tests, protests over racial injustice, a hurricane and rain -- and that's just in the past week.

The Astros and Angels moved up Thursday's game to Tuesday ahead of Hurricane Laura, which made landfall in Louisiana on Thursday morning. Houston's game on Wednesday against the Angels was postponed.