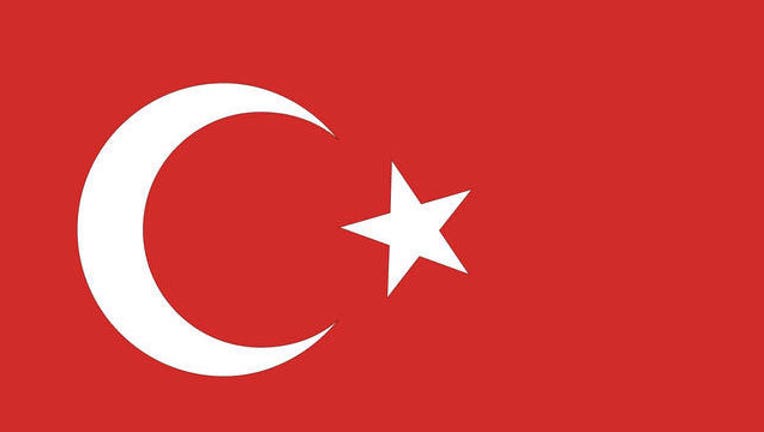 ISTANBUL (AP) — Suicide attackers armed with guns and bombs killed 41 people and wounded hundreds at Istanbul's busy Ataturk Airport, apparently targeting Turkey's crucial tourism industry. The government blamed the attack on Islamic State extremists but there was no immediate confirmation from the group.

Scenes of chaos and panic unfolded Tuesday night as gunfire and explosions sent crowds fleeing in all directions.

Airport surveillance video posted on social media appeared to show one explosion, a ball of fire that sent terrified passengers racing for safety. Another appeared to show an attacker, felled by a gunshot from a security officer, blowing himself up seconds later. A growing stream of travelers, some rolling suitcases behind them, fled down a corridor, looking fearfully over their shoulders.

"Four people fell in front of me. They were torn into pieces," said airport worker Hacer Peksen.

It was not clear if any attackers were still on the loose.

"When the terrorists couldn't pass the regular security system, when they couldn't pass the scanners, police and security controls, they returned and took out their weapons out of their suitcases and opened fire at random at the security check," said Prime Minister Binali Yildirim.

All three attackers arrived together at the lower-level arrivals hall; one went inside, opened fire and then detonated his explosives, according to an Interior Ministry official and another official.

During the chaos, the second attacker went upstairs to departures and blew himself up.

The third man waited outside during the whole episode and detonated his explosives last as people flooded out of the airport, the officials said.

Separately, a senior Turkish security official said the three attackers were not Turkish nationals. All officials spoke on condition of anonymity because they were not authorized to speak publicly about the investigation.

Paul Roos, a South African tourist who was due to fly home with his wife, said he heard shots while coming up the escalator.

"There was this guy going roaming around, he was dressed in black and he had a handgun."

Funerals for some of the victims began Wednesday as Turkish authorities tried to piece together how the attack happened, going through surveillance footage and interviewing witnesses to establish a preliminary timeline.

As dawn broke over the destroyed terminal, workers began removing debris. The airport reopened Wednesday morning, in sharp contrast to the 12-day complete shutdown in Brussels after the deadly airport bombing there in March. An information board inside showed about one-third of scheduled flights were canceled and a host of others were delayed.

By evening, the Islamic State group had not claimed responsibility for the attack, although it did issue an infographic celebrating two years since announcing a caliphate. It claimed to have "covert units" in Turkey, among other places, according to the SITE Intelligence Group.

"So, what can we think? We cannot think anything," said Ali Batur, whose brother died. "A terror attack might happen everywhere, it happens everywhere. ... If God permits, we will get over this in unity and solidarity."

Yildirim said it appeared that the Islamic State group, which has threatened Turkey repeatedly, was responsible.

"Even though the indications suggest Daesh, our investigations are continuing," Yildirim said, using shorthand for the Islamic State group. He also suggested the attack could be linked to steps Ankara took Monday toward mending strained ties with Israel and Russia.

Islamic State, however, rarely claims any attacks in Turkey. One possible reason is a reluctance to be seen as killing fellow Muslims; another is its desire to exploit the violent rift between Turkey and Kurdish rebels, said Anthony Skinner, director of the analyst group Verisk Maplecroft.

Turkey has suffered a series of attacks that have scared away visitors and devastated its economy, which relies heavily on tourism. The country is a key partner in the U.S.-led coalition against the Islamic State group and a NATO member. It faces an array of security threats, including from ultra-left radicals, Kurdish rebels demanding greater autonomy in the restive southeast, and IS militants.

Turkey also shares long, porous borders with both Syria and Iraq, where IS controls large pockets of territory and have blamed IS for several major bombings over the past year, including in the capital Ankara, as well as attacks on tourists in Istanbul.

"The reality is that Turkey is situated in a very vulnerable situation, geographically speaking," Skinner said.

The government has stepped up controls at airports and land borders and deported thousands of foreign fighters, but has struggled to tackle the extremist threat while also conducting security operations against Kurdish rebels. Turkish airports have security checks at both the entrances to terminal buildings and before the entrances to departure gates.

The devastation at Istanbul's airport echoed the March 22 attack on the Brussels airport, where two suicide bombings ripped through check-in counters, killing 16 people. The Islamic State group claimed responsibility for that attack, as well as an explosion the same day at a Brussels subway station that killed 16 more people.

"This has shown once again that terrorism is a global threat," Yildirim said. "This is a heinous planned attack that targeted innocent people."

"You can hear that people are wailing here," said Serdar Tatlisu, a relative of a victim. "We cannot cope anymore, we can't just stay still. We need some kind of solution for whatever problem there is."

Yildirim later visited some attack victims at the hospital. By late afternoon, 128 were still hospitalized, 41 of them in intensive care.

This year alone, a Jan. 12 attack that Turkish authorities blamed on IS claimed the lives of a dozen German tourists visiting Istanbul's historic sites. On March 19, a suicide bombing rocked Istanbul's main pedestrian street, killing five people, including the bomber, whom the authorities identified as a Turkish national linked to IS.

Last October, twin suicide bombings hit a peace rally outside Ankara's train station, killing 103 people. There was no claim of responsibility but Turkish authorities blamed it on an Islamic State cell.