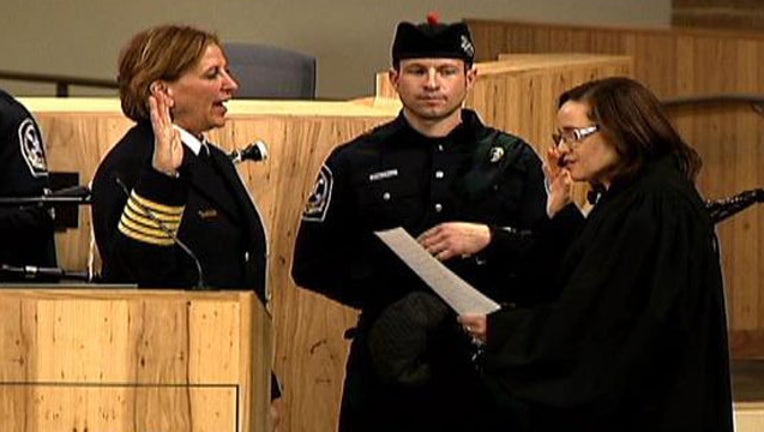 She will soon be sworn into another prestigious firefighting position.

Chief Kerr will head up the International Association of Fire Chiefs. Men have held the position for 142 years.

"I think it was time a woman lead the organization," she told FOX 7’s Noelle Newton.

Breaking barriers has been a trend in Kerr's 30 plus year career.

She held every position except Chief at her first department in Ft. Lauderdale, Florida. She then took on the role of Chief in Little Rock, Arkansas before coming to Central Texas.

It's in her blood. She’s a fourth generation firefighter.

Kerr's grandfather's badge hangs on her wall. He was a Chief of a volunteer fire department. Kerr's father was in the forest service.

Kerr didn't continue the legacy at first. She actually took a job teaching after college.

"Once I got into it, I found my nitch and I knew I wanted to be Chief of the department one day and here I am."

Since becoming Chief of the Austin Fire Department, more women have been hired and promoted.

"You can debate whether that was a natural occurrence or was that have something to do with me being here. I like to think it does with the fact that I'm front and center. I'm always out in the community. And people see that there are women leading the organization and we do good things to take care of all of our employees, but we make sure that our policies, our procedures, our facilities as best that we can are accommodating for a mixed gender workforce," she explains.

One project she continues to work on is converting station locker rooms to be more gender-friendly. The overhaul began in 1999. It is now in the 5th of 6 phases.

Kerr's top focus as chief is having zero fire deaths. Unfortunately, woman was killed in a house fire in East Austin on Tuesday.

“There were not any working smoke alarms in the home."

She has sprinklers in her home and says we all should. It's an issue she will advocate locally.

So what is her next goal? The Superintendent of the National Fire Academy is one last position that has never been held by a woman.

"I don't think, think I want to be that woman, but I'm hoping to see women start to rise and take those positions of leadership."

Most of all, Kerr says she wants to be a role model and by the reactions of her staff. It appears she is.

“I had one of the women in the organization. She's a captain. She said, 'Chief told me I'm going to be the first female Battalion Chief in the department." I'm like 'yes.' That's the best thing to hear. People see and want to achieve goals and I want others to follow. It shouldn't be an elite club."