AUSTIN, Texas - Austin ISD says that it paid hundreds of millions more than other Texas school districts in recapture payments for the 2020-21 school year.

According to the district, Austin ISD paid $710,604,433 in recapture for the previous school year – that’s almost half of the district's annual budget of $1.7 billion.

For reference, Houston ISD, which is the largest school district in Texas and the eighth-largest in the nation, only paid $197,809,821 in recapture for the same school year. Houston ISD also serves more than double the number of students as Austin ISD.

Let's take a look at the recapture payment system in Texas:

Recapture, also known as Robin Hood, is a funding plan put in place in 1993 to require school districts with higher property wealth to pay surplus tax revenue to the state, which would then distribute the funds to property-poor school districts. Recapture places a cap on the amount of money property-rich school districts can keep from property taxes.

Recapture was installed in response to lawsuits against the state looking to "force it to correct huge disparities in resources among the state's public schools," says the Texas Tribune. Lawmakers were mandated by the Texas Supreme Court to come up with a plan to help poorer school districts have access to enough funds to be able to educate their students.

In 2019, the Texas Legislature passed House Bill 3 to reform school finance and according to the TEA, reduced recapture by:

How is recapture calculated?

According to the TEA, recapture is calculated by determining how much state funding school districts and charter schools are entitled to receive through the Foundation School Program (FSP).

The FSP uses provisions set in chapters 41, 42, 46, and 48 of the TEC that take into consideration a number of student and district characteristics, including the number and type of students enrolled, district size and geographic factors, and local taxable property values and tax rates, says the TEA.

These provisions are used to determine the total amount of FSP formula funding a school district is entitled to each school year. On average in FY 2021, school districts in Texas received $7,100 in local property tax revenue and $4,242 in state revenue, or $11,351 total, $9,713 adjusted for inflation, per student in average daily attendance (ADA). 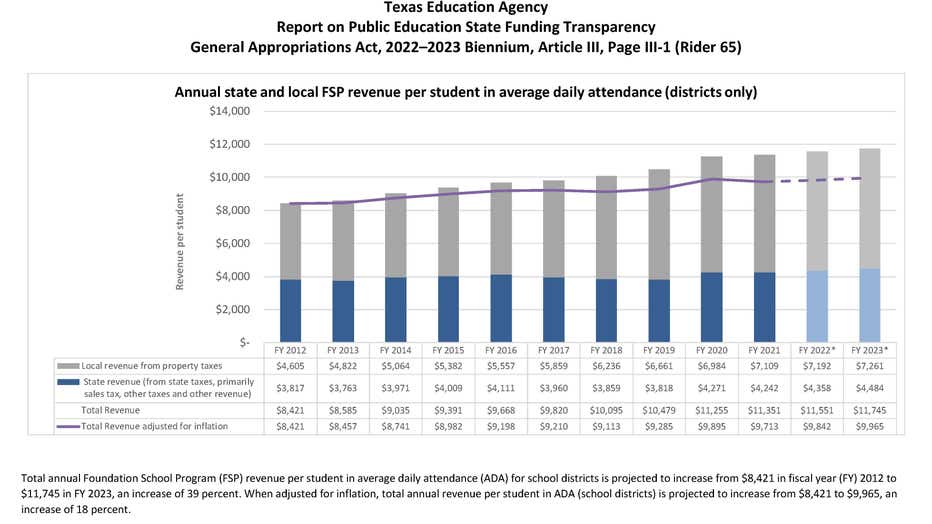 The TEA says that final determination of recapture is then made using the district’s final enrollment, entitlement and local share under Chapter 48, final state certified property values for that tax year, adopted maintenance and operations (M&O) tax rate for that tax year, and M&O taxes collected by the district in that school year.