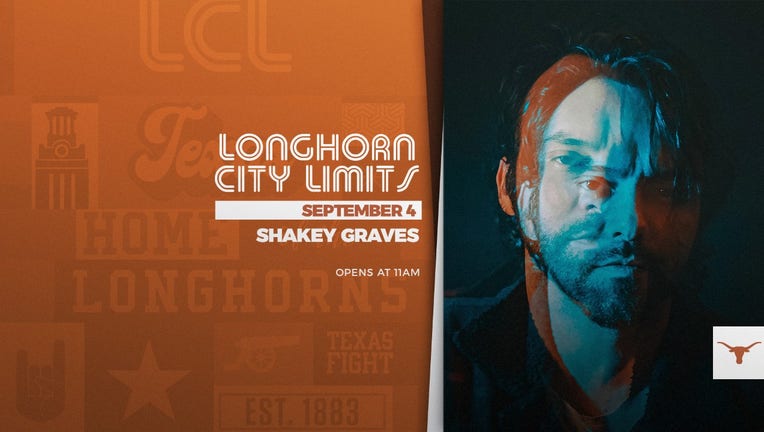 The free concert series will take place on the LBJ Lawn prior to the Longhorn season opener against Louisiana.

AUSTIN, Texas - Austin native Shakey Graves is set to headline Longhorn City Limits prior to Texas Football’s season opener versus Louisiana on September 4 according to an announcement Wednesday.

LCL returns for its third year on the LBJ Lawn, located on the northeast corner of DKR-Texas Memorial Stadium. All concerts are free and open to the public, along with pre and postgame activities.

"Home is where the Horns are," said Vice President and Director for Athletics Chris Del Conte Wednesday. "And what better way to celebrate the return of Longhorn City Limits than by having Shakey Graves, one of Austin’s most acclaimed artists, take the stage on September 4. I can’t wait to see Longhorn Nation back on the LBJ Lawn for what is set to be the return of an incredible Texas Football gameday experience."

Shakey Graves, real name Alejandro Rose-Garcia, Infuses blues, folk, and rock, often taking the stage with a one-man-band approach. His 2011 debut album "Roll The Bones" recently celebrated its 10th anniversary with a re-release. In 2015, Graves was named the Best Emerging Artist at the Americana Music Awards. His sold-out shows at Stubb’s in June 2021 celebrated the return of live music after a long hiatus.

A support act will be announced at a later date.

In addition, fans can enjoy all of the LCL amenities on the LBJ Lawn including the Deep Eddy Lounge. This season, the cocktail garden will be twice as large with twice as much shade for fans ages 21 and older to enjoy craft cocktails. beers. Stubb's Bar-B-Q will also return to the lawn this year.