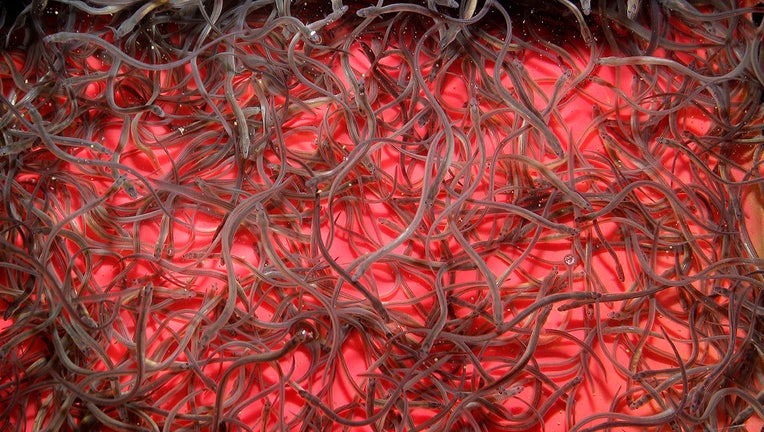 PORTLAND, Maine - Concerns that war in Europe or fickle weather might hold back one of America's most valuable fisheries appear to have been unfounded.

Baby eels, also called elvers, are one of the most lucrative wild fish species in the U.S. Maine is the only state in the country with a sizeable baby eel fishing industry, and the price for the tiny fish is back up to pre-pandemic levels this spring.

Fishermen are selling the baby eels for $2,110 per pound at docks, the Maine Department of Marine Resources reported Monday. They've also already run through more than four-fifths of their quota for the season, which runs from late March to early June.

The eels are so valuable because they're needed by Asian aquaculture companies, which raise them to maturity to be used as food. Value for the eels sank to $525 per pound in 2020, when the COVID-19 pandemic upset markets, before rebounding to more than three times that last year.

Members of the industry said before this season started that they feared the international seafood supply chain could be jeopardized by war or renewed COVID-19 lockdowns in Asia.

The industry does indeed face challenges, such as the closing of the Hong Kong border at the start of the season, but it's experiencing strong demand and high catch, said Mitchell Feigenbaum, an elver dealer.

"Eels move slower, makes the business riskier, but the underlying demand is strong, which is good news for harvesters," Feigenbaum said. "The catches came very early this season and in numbers that we have not seen since 2012."

Fishermen harvest the baby eels with nets from rivers and streams in Maine. They've been aided by favorable weather this year. The banks of the Presumpscot River, which flows through the state's largest city of Portland, has been flanked by fishermen with fyke nets in recent weeks.

The eels are part of the worldwide supply chain for sushi and Japanese food. Some return to America, where they are served in Japanese restaurants in dishes such as kabayaki.