WASHINGTON - President Joe Biden on Monday called for "peace and calm" and said there is "no justification" for violence or looting amid the fatal shooting of a Black man in a Minneapolis suburb by a police officer.

The man, identified by relatives as 20-year-old Daunte Wright, died Sunday in Brooklyn Center, a city of about 30,000 people on the northwest border of Minneapolis. His death sparked immediate protests, leading to police in riot gear clashing with demonstrators into Monday morning.

The Minneapolis area was already on edge because of the trial of the first of four police officers charged in George Floyd’s death.

The president, speaking from the White House, said the question of whether Wright’s shooting was an accident or intentional "remains to be determined by a full-blown investigation."

The body camera video of the incident was released during a news conference, in which the officer, who has not been formally identified, is heard shouting "taser, taser!" but was holding her handgun instead. She then fired a single shot.

Biden said he had watched the "fairly graphic" body camera footage of the shooting but hadn’t yet spoken to Wright’s family.

"In the meantime, I want to make it clear again: there is absolutely no justification—none—for looting. No justification for violence. Peaceful protests? Understandable," Biden said. 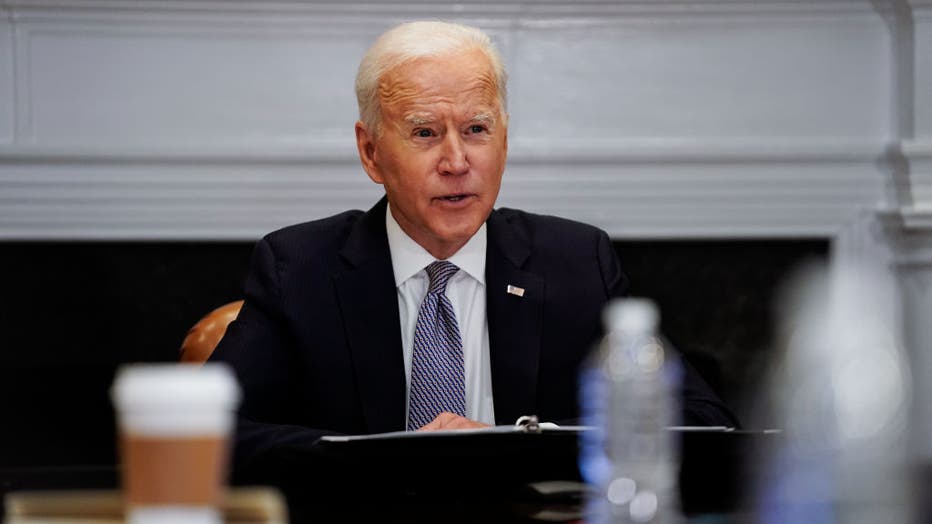 White House press secretary Jen Psaki said the White House has been in touch with the Minnesota governor, mayor and local law enforcement.

"We were incredibly saddened to hear about the loss of life at the hands of law enforcement in Minnesota yesterday," she said.

Gov. Tim Walz said on Twitter he was praying for Wright’s family "as our state mourns another life of a Black man taken by law enforcement."

The incident started shortly before 2 p.m. local time when officers stopped Wright’s vehicle for expired tags, according to FOX 9 Minneapolis-St. Paul. After learning the driver had an outstanding warrant, police said they tried to arrest him but he got back into his vehicle.

At that point, the officer fired her gun, striking him, police said. The vehicle traveled several blocks before crashing into another car. Wright was pronounced dead at the scene.

Wright’s family offered a different account, with his mother Katie Wright telling the Associated Press that her son was shot before getting back into the car.

A female passenger sustained non-life-threatening injuries during the crash, authorities said. Katie Wright said that passenger was her son’s girlfriend.

The Minnesota Bureau of Criminal Apprehension is now investigating the deadly shooting.

Court records show Wright was being sought after failing to appear in court on charges that he fled from officers and possessed a gun without a permit during an encounter with Minneapolis police in June. In that case, a statement of probable cause said police got a call about a man waving a gun who was later identified as Wright.

Shortly after the shooting, demonstrators began to gather, with some jumping on police cars. Marchers also descended on the Brooklyn Center Police Department, where rocks and other objects were thrown at officers, authorities said. The protesters had largely dispersed by 1:15 a.m. Monday.

National Guard troops and law enforcement officers continued to guard the front of the police department on Monday morning. Police were erecting a concrete barrier as Minnesota State Patrol officers joined the line in front of the precinct.

"The fact is that, you know, we do know that the anger, pain and trauma that exists in the Black community in that environment is real. It’s serious and it’s consequential, but it will not justify violence or looting," Biden said.

Speaking before the unrest, Katie Wright urged protesters to stay peaceful and focused on the loss of her son.

"All the violence, if it keeps going, it’s only going to be about the violence. We need it to be about why my son got shot for no reason," she said to a crowd near the shooting scene. "We need to make sure it’s about him and not about smashing police cars, because that’s not going to bring my son back."