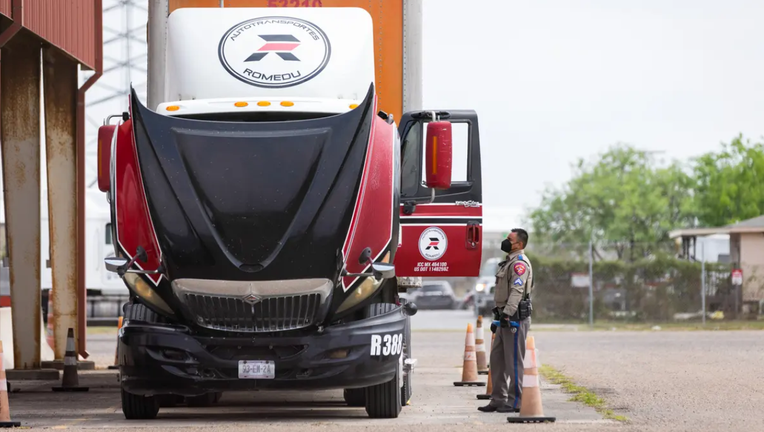 A Texas Department of Public Safety trooper inspects a commercial truck at a station in Brownsville.  (Michael Gonzalez for The Texas Tribune)

"Governor Abbott’s unnecessary and redundant inspections of trucks transiting ports of entry between Texas and Mexico are causing significant disruptions to the food and automobile supply chains, delaying manufacturing, impacting jobs, and raising prices for families in Texas and across the country," White House press secretary Jen Psaki said in a statement.

Psaki’s statement comes as Abbott is slated to have a meeting and press event with Samuel Alejandro García Sepúlveda — the Mexican governor of Nuevo León, the state that includes a section of the border near Laredo — later Wednesday afternoon.

García said Tuesday that he had come to an agreement with Abbott that the governor would lift his extra level of inspections as long as no immigration violations occurred, according to KGNS-TV.

But an agreement with García’s state alone would provide little relief.

The Laredo-Colombia Solidarity International Bridge is the only commercial border crossing between Texas and Nuevo León. Other Mexican border states, such as Tamaulipas south of the Rio Grande Valley, Coahuila south of Del Rio and Eagle Pass, and Chihuahua south of El Paso, have many more commercial crossings with Texas.

A Tuesday letter from the governors of Tamaulipas and Coahuila — whose territories include large chunks of the U.S.-Mexico border — said the inspections "are creating havoc and economic pain on both sides of the border" and that "what we have today is a no-win situation for anyone."

"This policy will ultimately increase consumer costs in an already record 40-year inflated market — holding the border hostage is not the answer," the letter said.

Commercial vehicles crossing into the United States from Mexico are having to wait hours as a result of Abbott’s new initiative while state troopers are supposed to check each one that crosses select border ports. The state inspection of vehicles comes after U.S. Customs and Border Protection officials check them first at the port of entry.

The Texas Department of Public Safety has never checked every commercial vehicle entering Texas from Mexico, and it is unclear how thoroughly state troopers are inspecting the vehicles.

Earlier this week, commercial traffic halted at the Pharr-Reynosa International Bridge — the busiest trade crossing in the Rio Grande Valley, which handles $60 million to $70 million in American imports daily of produce and goods from Mexico — when Mexican truckers blocked traffic in protest of the inspections.

The delays at the cross-border bridges have led to a 60% drop in commercial traffic at the border just in the days since Abbott’s initiative started, according to border control officials.

Abbott announced the vehicle inspections April 6 in response to what he said was a failure on the Biden administration’s part to manage the high number of migrant crossings at the country’s southern border. That day, he also announced an initiative to bus migrants who volunteer to Washington, D.C., where he said the federal government could "more immediately address" the needs of asylum-seekers.

According to a press release from the governor’s office, the first bus with migrants arrived in Washington today. There were few immediate details available about how many people were on the bus.

The order to inspect vehicles and bus migrants came after the Biden administration announced that it would drop Title 42 — a pandemic-era rule that allowed the government to quickly expel migrants without letting them seek asylum. Republicans from across the country have called for the administration to keep the rule as one of the only pathways to control the border, while many Democrats pushed Biden to drop the rule out of human rights concerns.

Texas Agriculture Commissioner Sid Miller called on Abbott on Tuesday to halt the commercial vehicle inspections, which he said were "political theater" and could leave grocery stores with empty shelves in the coming weeks. Beto O’Rourke, who is running for governor against Abbott, called the initiative "a very expensive stunt."

"The continuous flow of legitimate trade and travel and CBP’s ability to do its job should not be obstructed," Psaki said. "Governor Abbott’s actions are impacting people’s jobs, and the livelihoods of hardworking American families."

More information at the Texas Tribune