WASHINGTON - President Joe Biden is not ruling out having members of the U.S. military get vaccinated against COVID-19, but said requiring it would be "a tough call."

Biden was asked if he would require military members to get inoculated once the virus shots are fully approved by the U.S. Food and Drug Administration. Currently, three COVID-19 vaccines developed by Pfizer-BioNTech, Moderna and Johnson & Johnson have an emergency use authorization from the agency in an effort to make the shots more quickly available.

"I don’t know. I’m going to leave that to the military," Biden told NBC News in an interview broadcast Friday.

"I’m not saying I won’t. I think you’re going to see more and more of them getting it," Biden continued. "And I think it’s going to be a tough call as to whether or not they should be required to have to get it in the military because you’re in such close proximity with other military personnel." 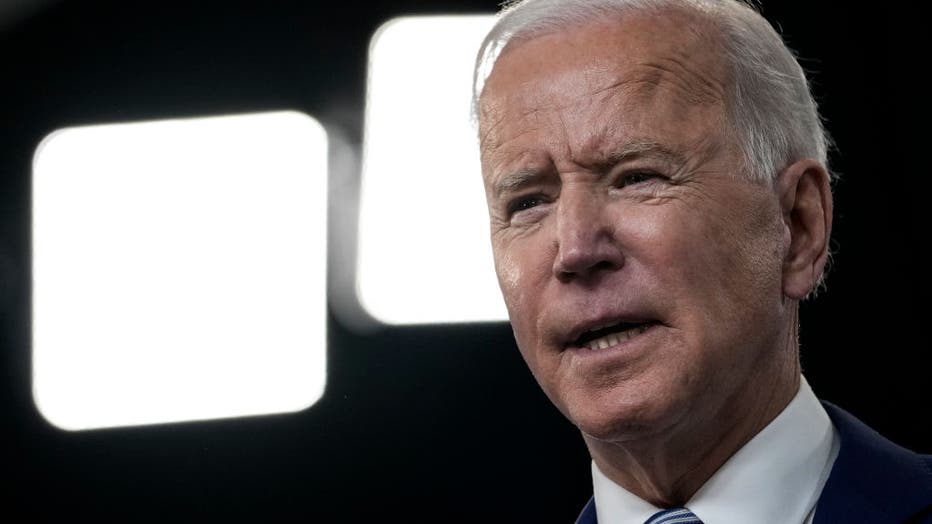 President Joe Biden delivers remarks on the COVID-19 response and the state of vaccinations in the South Court Auditorium at the White House complex on March 29, 2021 in Washington, D.C. (Photo by Drew Angerer/Getty Images)

Nearly 495,000 service members are fully vaccinated, while 285,000 have received at least one dose of a shot, according to data from the Department of Defense.

Nearly 40% of Marines who have had the chance to receive the vaccine have turned it down, according to Military.com, citing force-wide data. That equates to roughly 48,000 of the 123,000 individuals in the Marine Corps.

National security advisor Jake Sullivan, who was asked about the topic Friday, said a vaccine mandate is "something the Department of Defense is looking at in consultation with the interagency process and (I) don’t have anything to add on that subject today," The Hill reported.

The mass vaccination campaign has been a defining part of Biden’s first 100 days in office. One of Biden's first actions as president was to increase the federal government's orders for the vaccines to ensure supplies for all Americans by early summer. After surpassing his initial goal of 100 million doses administered in 100 days, Biden set and met a new goal of 200 million jabs in arms within that time frame — a figure that includes some people's second dose.

To date, nearly 145 million people have received at least one dose of a vaccine, while more than 101 million Americans — or 30.5% — are fully vaccinated, data from the U.S. Centers for Disease Control and Prevention shows.

Republican senators and representatives who have medical degrees urged Americans to get the coronavirus vaccine in a video released on April 27, 2021. Credit - Dr Roger Marshall via Storyful

With demand starting to sag in some areas of the country, the president is now tasked with overcoming the challenges of getting more shots and making it easier to do so.

The White House has deployed billions of dollars toward ads encouraging vaccines, community programs to bring doses to the hardest to reach Americans, and even tax credits to encourage employers to give their workers paid time off to get protected.