ELMAU, Germany (AP) - President Joe Biden and Western allies opened a three-day summit in the Bavarian Alps on Sunday intent on keeping economic fallout from the war in Ukraine from fracturing the global coalition working to punish Russia’s aggression.

Britain’s Boris Johnson warned the leaders not to give in to "fatigue" even as Russia lobbed new missiles at Kyiv.

The Group of Seven leaders were set to announce new bans on imports of Russian gold, the latest in a series of sanctions the club of democracies hopes will further isolate Russia economically. They also were looking at possible price caps on energy meant to limit Russian oil and gas profits that Moscow can pump into its war effort. 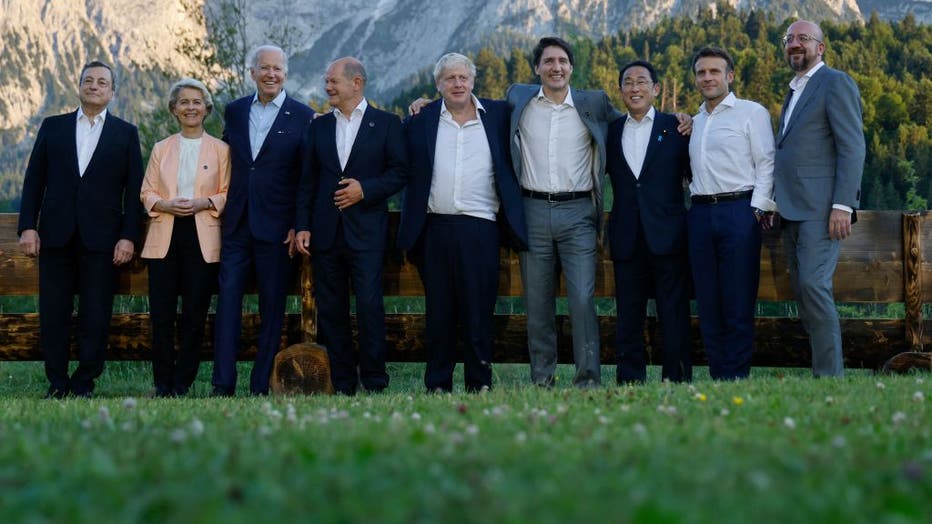 U.S. officials have long argued that China’s infrastructure initiative traps receiving countries in debt and that the investments benefit China more than their hosts.

In a pre-summit show of force, Russia launched its first missile strikes against the Ukrainian capital in three weeks, striking at least two residential buildings, according to Kyiv Mayor Vitali Klitschko.

Biden condemned Russia’s actions as "more of their barbarism," and stressed that allies need to remain firm even as the economic reverberations from the war take a toll around the globe in inflation, food shortages and more.

"We have to stay together, because Putin has been counting on, from the beginning, that somehow NATO and the G-7 would splinter, but we haven’t and we’re not going to," Biden said during a meeting with German Chancellor Olaf Scholz, who holds the G-7′s rotating presidency and is hosting the gathering.

As the G-7 leaders sat down for their opening session, they took a light-hearted jab at Putin. Johnson could be heard asking whether he should keep his jacket on, adding, "We all have to show that we’re tougher than Putin." Canadian Prime Minister Justin Trudeau chimed in: "A bare-chested horseback ride." 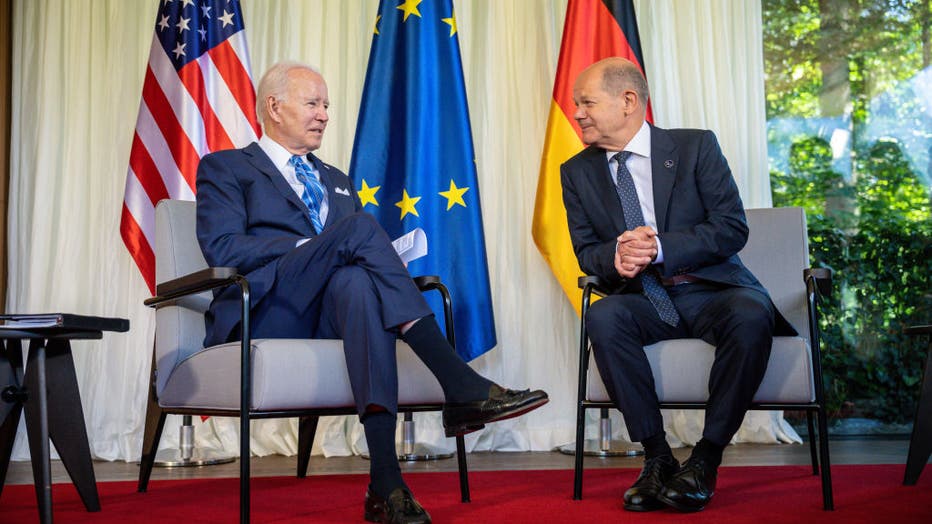 26 June 2022, Bavaria, Elmau: German Chancellor Olaf Scholz (SPD), sits next to U.S. President Joe Biden (l) at the start of a bilateral meeting before the start of the actual summit. Germany is hosting the G7 summit of economically strong democracie

Over the years, the Kremlin has released several photos of the Russian leader in which he appears shirtless.

Biden and his counterparts were using the gathering to discuss how to secure energy supplies and tackle inflation triggered by the war’s fallout.

The leaders also came together on the new global infrastructure partnership meant to provide an alternative to Russian and Chinese investment in the developing world. One by one, the leaders stepped up to the microphone to discuss the partnership and their roles in it — without mentioning China by name.

Ukraine cast a shadow over the gathering, but the leaders were determined to project resolve.

Scholz told Biden that the allies all managed "to stay united, which obviously Putin never expected."

Biden said of Putin’s war: "We can’t let this aggression take the form it has and get away with it."

Scholz, who has faced criticism at home and abroad for perceived reluctance to send Ukraine heavy weapons, said, "Germany and the U.S. will always act together when it comes to questions of Ukraine’s security."

Johnson, for his part, urged fellow leaders not to give in to "fatigue." He has expressed concern that divisions may emerge in the pro-Ukraine alliance as the four-month-old war grinds on.

Asked whether he thought France and Germany were doing enough, Johnson praised the "huge strides" made by Germany to arm Ukraine and cut imports of Russian gas. He did not mention France.

Biden and Scholz, in their pre-summit meeting, agreed on the need for a negotiated end to the Ukraine war, but did not get into specifics on how to achieve it, said a senior Biden administration official, who requested anonymity to reveal details of a private conversation.

However, they did not have an extensive discussion about oil price caps or inflation, the official said.

The head of the European Union’s council of governments said the 27-member bloc maintains "unwavering unity" in backing Ukraine against Russia’s invasion with money and political support, but that "Ukraine needs more and we are committed to providing more."

The EU has imposed six rounds of sanctions against Russia, the latest one being a ban on 90% of Russian crude oil imports by the end of the year. The measure is aimed at a pillar of the Kremlin’s finances, its oil and gas revenues.

Biden and the leaders of Britain, Canada, France, Germany, Italy and Japan, plus the EU, spent Sunday in both formal and informal settings discussing the war’s effects on the global economy, including inflation.

Biden said G-7 nations, including the United States, will ban imports of gold from Russia. A formal announcement was expected Tuesday as the leaders wind up their annual summit.

Johnson said the ban will "directly hit Russian oligarchs and strike at the heart of Putin’s war machine."

"Putin is squandering his dwindling resources on this pointless and barbaric war. He is bankrolling his ego at the expense of both the Ukrainian and Russian people," Johnson said. "We need to starve the Putin regime of its funding."

Gold, in recent years, has been the top Russian export after energy — reaching almost $19 billion or about 5% of global gold exports, in 2020, according to the White House.

As for the idea of price caps on energy, Michel said, "we want to go into the details, we want to fine-tune ... to make sure we have a clear common understanding of what are the direct effects and what could be the collateral consequences" if such a step were to be taken by the group.