TAMPA, Fla. - The era of virtual campaigning did not start well for Joe Biden.

A 45-minute rally targeted at a Tampa audience did not go as planned, as it was rife with poor audio quality, choppy video, and a candidate who wasn't even sure when he was on camera.

For just under 10 minutes, the former vice president spoke from a Florida-like setting at his home in Delaware.

Virtual rallies are a way for the presumptive Democratic nominee to target areas that will be crucial for his White House run, while still practicing social distancing.

"In the thick of this crisis, Florida has the worst rate of fulfilling unemployment claims of any state in the country," Biden said. "It's no surprise, the unemployment system was allowed to be hollowed out by Gov. Scott in 2011."

His theme: President Trump isn't equipped to handle a pandemic.

"This crisis is revealing so much about our society, including just how critical it is to have competence in government," Biden said.

At one point, about 2,600 were watching live on YouTube, though the number dropped to about 2,000 as the tech problems went on, which included a six-minute period of black screen during the warm-up speakers. 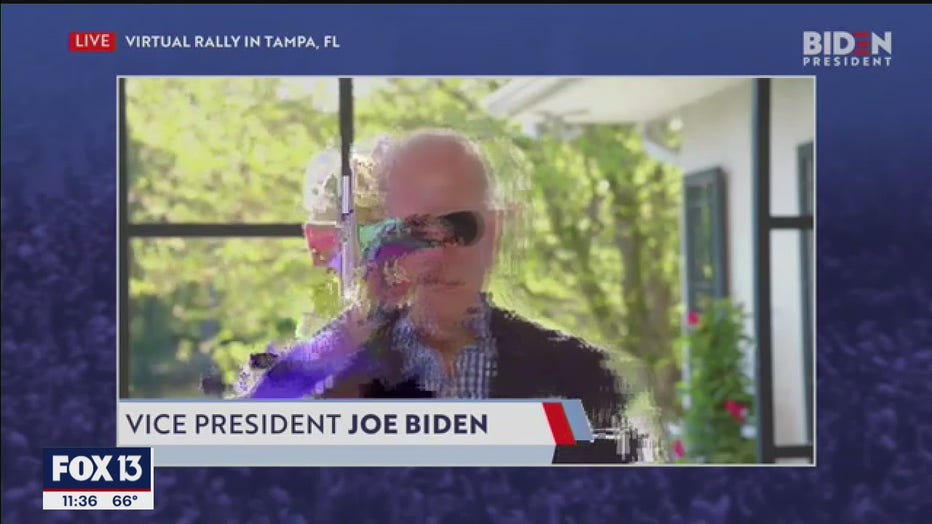 Before the rally, the Trump campaign held a conference call with reporters and one of their main points is that they consider their digital outreach efforts far ahead of the Biden campaign's.

"We are absolutely crushing it here on the ground in Florida and we are not going to stop," said Florida GOP chair Joe Gruters.

After the rally, the Biden campaign declined to answer any further questions about the technical issues.