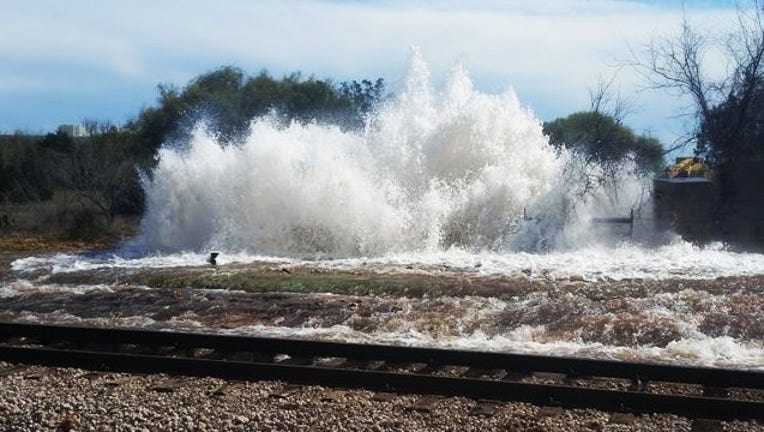 AUSTIN, Texas - Thursday afternoon, there was a geyser on Spectrum Drive in North Austin...a big water main break right next to the Metro Rail line.

John Julitz with Cap Metro says the water did some damage to the tracks.

"That water is impacting the ballast, the rock that supports the stability of the tracks. You can see on the other side some of the rock has started to wash away. That is certainly going to present a safety issue," Julitz said.

He says until Cap Metro crews can strengthen the tracks, Metro Rail passengers are being put on buses instead.

"We're running buses to transport passengers between Howard and Lakeline. The other portions of the line, the Metro Rail service is operating so once passengers are able to either get on or off a bus once we get past this problem point, they're able to continue on with their trip via the Metro Rail," he said.

Jason Hill with Austin Water was on scene while city crews determined which main it was. They were able to turn off the valves to the geyser around 5:00.

"24 inches is a pretty sizable water main. It carries a lot of water and it's under a lot of pressure," Hill said.

Hill says construction crews using a rock trencher took a 2 foot chunk out of the pipe.

He says they'll be working through the night to repair it.

There's an apartment complex on one side of the tracks and a warehouse on the other side.

Hill says they've managed to keep the water on at both of those locations and he doesn't believe anywhere else has lost water service.

Cap Metro says they're also working through the night hoping to strengthen the line and get Metro Rail service back to normal by tomorrow morning -- if not though they will continue the bus service.