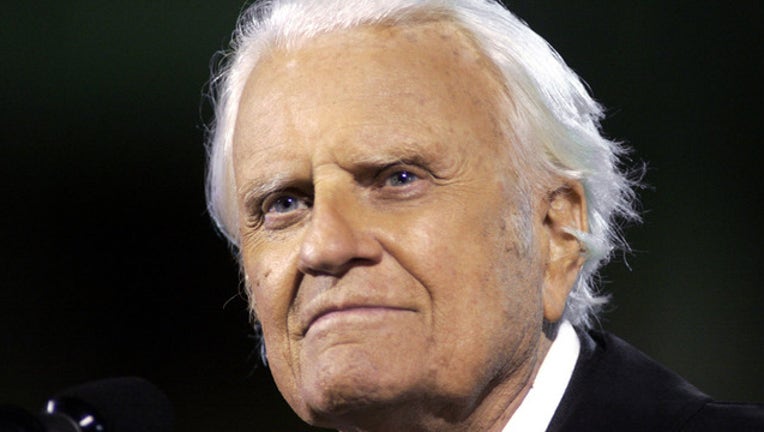 WASHINGTON (AP) — Congress is reserving one of the nation's greatest distinctions for the Rev. Billy Graham, selecting him to lie in honor in the U.S. Capitol Rotunda next Wednesday and Thursday.

America's most famous evangelist died Wednesday at his home in North Carolina at age 99.

The Rotunda has long been considered the most suitable place for the nation to pay final tribute to its most eminent citizens. Among those who have lain in state or in honor in the Rotunda are 12 former presidents, including Abraham Lincoln and John F. Kennedy, former military commanders Douglas MacArthur, George Dewey and John Pershing, and civil rights icon Rosa Parks.

Here's a look at some of the history and names behind the honor.

'LYING IN STATE' OR 'LYING IN HONOR'

The Senate Historical Office explains that there are no hard and fast rules on this, but "lying in state" ceremonies are usually reserved for deceased presidents and other elected officials. "Lying in honor" has become the phrase used in recent years to describe ceremonies for those who didn't serve in elected office. Graham is just the fourth to receive that designation. The others are two former U.S. Capitol Police officers who died in the line of duty in 1998 and Parks in 2005.

The honor is essentially the same regardless of the language used, but "lying in state" ceremonies are accompanied by full military honors, while "lying in honor" ceremonies may only have a Capitol Police detail.
___

Either Congress can pass a resolution or congressional leadership can give the approval after consulting with survivors.

In Graham's case, Speaker Paul Ryan and Senate Majority Leader Mitch McConnell announced the ceremony after conferring with the Rev. Franklin Graham. "With your approval, we will move forward with these arrangements, so that Americans have this opportunity to pay their respects to the Rev. Graham before he is laid to rest," they said in a letter to Franklin Graham.
Lawmakers are also expected to pass a resolution authorizing the use of the Rotunda for the honor.
___

Ryan explained in his announcement that Graham forever changed the course of the world's spiritual health. He served as an adviser to 12 consecutive U.S. presidents and reached millions through radio, television and film. Graham is also a hero to many of the millions of evangelical Christians who associate themselves with conservative policies and the Republican Party.
___

A platform hastily constructed to support the casket of Abraham Lincoln while the president's body lay in state has been preserved and is used to hold the coffins of all those who lie in state in the Capitol Rotunda.
When not in use, the platform, or catafalque, is kept in a specially constructed display area in the Capitol Visitor Center. The catafalque is a simple base of rough pine boards nailed together and covered with black cloth.
___

OTHERS WHO HAVE LAIN IN STATE IN THE ROTUNDA

The list maintained by the Architect of the Capitol includes several members of Congress, beginning with Henry Clay of Kentucky in 1852 and, most recently, Sen. Daniel Inouye of Hawaii in 2012. The non-elected officials who have lain in state include former FBI Director J. Edgar Hoover and Washington, D.C., planner Pierre L'Enfant. Lawmakers have also chosen to perpetuate the memory of service members who gave their lives in war by honoring unknown soldiers from World War I, World War II, the Korean War and the Vietnam War.