BUDA, Texas - The Hays High School volleyball team has issued a response after allegations of racial comments at their recent game against Canyon High School in New Braunfels.

Comal Independent School District's acting superintendent Mandy Epley said in a letter that at the Sept. 2 game, members of the Canyon student section allegedly made "highly inappropriate and demeaning racial comments" towards members of the Hays team.

Comal ISD said it was investigating the incident and that any student or group of students found to have made any sort of racial comments at any point during or after the game "will be disciplined to the fullest extent possible."

In the letter, Epley also apologized to the Hays High School players, coaches and community for "any inappropriate comments that may have been made," adding "Please be assured that we will get to the bottom of this issue and that Comal ISD will not tolerate any racially intolerant behavior." 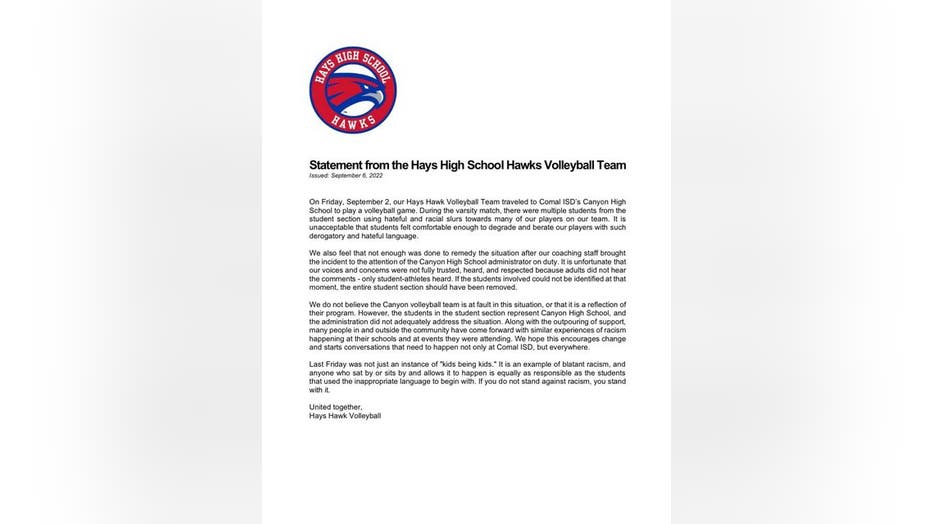 Letter sent by Hays Hawk volleyball in response to alleged racist comments made at their game against Canyon High School.

On Sept. 6, the Hays Hawk volleyball team issued its response to the incident.

"During the varsity match, there were multiple students from the student section using hateful and racial slurs towards many of our players on our team. It is unacceptable that students felt comfortable enough to degrade and berate our players with such derogatory and hateful language.

We also feel that not enough was done to remedy the situation after our coaching staff brought the incident to the attention of the Canyon High School administrator on duty. It is unfortunate that our voices and concerns were not fully trusted, heard, and respected because adults did not hear the comments - only student-athletes heard. If the students involved could not be identified at that moment, the entire student section should have been removed.

We do not believe the Canyon volleyball team is at fault in this situation, or that it is a reflection of their program. However, the students in the student section represent Canyon High School, and the administration did not adequately address the situation. Along with the outpouring of support, many people in and outside the community have come forward with similar experiences of racism happening at their schools and at events they were attending. We hope this encourages change and starts conversations that need to happen not only at Comal ISD, but everywhere.

Last Friday was not just an instance of ‘kids being kids.’ It is an example of blatant racism, and anyone who sat by or sits by and allows it to happen is equally as responsible as the students that used the inappropriate language, to begin with. If you do not stand against racism, you stand with it."