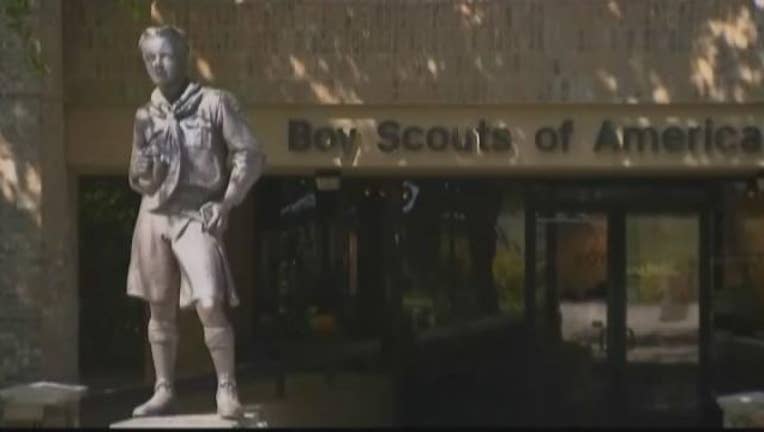 NEW YORK (AP) - The executive committee of the Boy Scouts of America has unanimously approved a resolution that would end the organization's blanket ban on gay adult leaders and let individual Scout units set their own policy on the long-divisive issue. Units sponsored by churches opposed to the change could maintain the ban if they choose.

In a statement Monday, the BSA said the resolution was approved by the 17-member executive committee on Friday, and would become official policy immediately if ratified by the organization's 80-member National Executive Board at a meeting on July 27.

The committee action follows an emphatic speech in May by the organization's president, former Defense Secretary Robert Gates, declaring that the long-standing ban on participation by openly gay adults was no longer sustainable. He and other BSA leaders said the ban was likely to be the target of lawsuits that the Scouts were apt to lose.

In 2013, after bitter internal debate, the BSA decided to allow openly gay youth as scouts, but not gay adults as leaders.

Under the new resolution, local scout units would be able to select adult leaders without regard to sexual orientation - a stance that several scout councils have already adopted in defiance of the official national policy.

"This change allows Scouting's members and parents to select local units, chartered to organizations with similar beliefs, that best meet the needs of their families," the BSA statement said. "This change would also respect the right of religious chartered organizations to continue to choose adult leaders whose beliefs are consistent with their own."

Several denominations that sponsor large numbers of Scout units - including the Roman Catholic Church, the Mormon church and the Southern Baptist Convention - have been apprehensive about ending the ban on gay adults.

Southern Evangelical Seminary President Richard Land, who formerly led the Southern Baptist Convention's Ethics and Religious Liberty Commission, said he was glad the policy allowed an exemption for religiously sponsored groups, but it didn't resolve his main concern: That neither boys or girls in scouting should have leaders who are sexually attracted to their gender, whether the leader is gay or straight.

"If you put them in the compromising situations that you are sometimes in with Scout leaders and Scouts, in terms of camping and other situations, it could lead to great tragedy for children," Land said. "It's best to avoid the temptation."

In a memo sent Monday to local Scout officials nationwide, the BSA's top leaders said they had consulted their religious partners before acting on the resolution, and they pledged to defend the right of any church-sponsored units to continue excluding gay adults from leadership posts.

The BSA "rejects any interference with or condemnation of the diverse beliefs of chartering organizations on matters of marriage, family, and sexuality," the memo said.

The Mormon church, in a statement, indicated that this stance was crucial to its continued role as a leading sponsor of Boy Scout units.

"As a chartering organization, The Church of Jesus Christ of Latter-day Saints has always had the right to select Scout leaders who adhere to moral and religious principles that are consistent with our doctrines and beliefs," the church said. "Any resolution adopted by the Boy Scouts of America regarding leadership in Scouting must continue to affirm that right."

The BSA's deference to the religious organizations was criticized by Chad Griffin, president of the Human Rights Campaign, a national LGBT-rights group.

"Half measures are unacceptable and discriminatory exemptions have no place in the Boy Scouts," Griffin said in a statement. "It's long overdue that BSA leaders demonstrate true leadership and embrace a full national policy of inclusion."

Among other points in the BSA's memo:

Gates, who became the BSA's president in May 2014, said at the time that he personally would have favored ending the ban on gay adults, but he opposed any further debate after the Scouts' policymaking body upheld the ban. In May, however, he said at the BSA's annual national meeting that recent events "have confronted us with urgent challenges I did not foresee and which we cannot ignore."

He cited a defiant announcement by the BSA's New York City chapter in early April that it had hired Pascal Tessier, the nation's first openly gay Eagle Scout, as a summer camp leader. Gates also cited broader developments related to gay rights, and warned that rigidly maintaining the ban "will be the end of us as a national movement."

The Scouts' resolution was hailed by Zach Wahls, an Eagle Scout raised by two lesbian moms who now heads the advocacy group Scouts for Equality.

"While this policy change is not perfect - BSA's religious chartering partners will be allowed to continue to discriminate against gay adults - it is difficult to overstate the importance of today's announcement," Wahls said.

For a variety of reasons, the Boy Scouts - like several other major youth organizations - have experienced a membership decline in recent decades. Current membership, according to the BSA, is about 2.4 million boys and about 1 million adults.