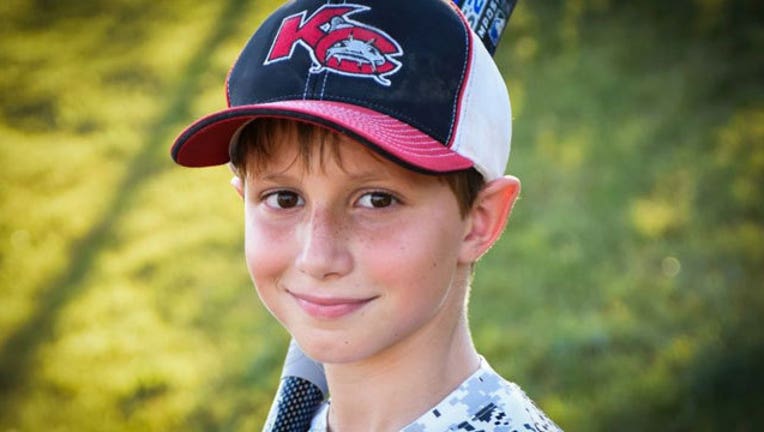 KANSAS CITY, Kan. (AP) — A 10-year-old boy was decapitated as he rode a 168-foot tall waterslide at a water park in Kansas, a person familiar with the investigation said Wednesday.

The person spoke on condition of anonymity because the person is not authorized to speak about Caleb Schwab's death Sunday on the raft ride at the Schlitterbahn WaterPark in Kansas City, Kansas.

Two women who are not family members were in the raft at the time with the boy and were treated for facial injuries. The boy's parents — Republican state Rep. Scott Schwab and his wife, Michele — have requested privacy and have not spoken publicly since the death. His funeral is scheduled for Friday.

A spokeswoman for the waterpark on Wednesday declined to discuss the circumstances of the boy's death. The Guinness World Records has certified the ride called "Verruckt" — or German for "insane" — as the tallest in the world.

The park reopened Wednesday except for the sprawling section including the waterslide, although its towering profile greeting visitors as soon as they drove through the entrance.

Verruckt riders sit in multi-person rafts that begin with a steep drop, followed by a surge up a second hill before a 50-foot descent to a finishing pool. Each Verruckt rider must be at least 54 inches tall, and the combined body weight of the riders on each raft is limited to 400 to 550 pounds.

Riders are harnessed in with two nylon seatbelt-like straps — one that crosses the rider's lap, the other stretching diagonally like a car shoulder seatbelt. Each strap is held in place by long Velcro-style straps, not by buckles. Riders also hang on to ropes inside the raft.

Pulling a cooler behind her, 42-year-old Sara Craig said she was looking forward to an afternoon of water fun Wednesday with her 14-year-old son, Cale, and one of his 13-year-old friends.

But she said the visit came with a twinge of unease, given Sunday's tragedy.

"I feel guilty having fun when a family is hurting so badly," she said.

She said the family rode Verruckt twice in one day a couple of weeks ago. She remembered a short video they were required to watch, though she didn't recall that it including any caveats about peril.

Craig said that during her first trip down the ride with her son and one of his friends, her shoulder restraint came off, something she opted not to report to park workers.

"I didn't think much about it," she said. "You don't think you're gonna die."

So they rode it again, only to see the restraint on her son's friend also come loose by the time it was over.

She said the ride's operators sent them down the slide even though their combined weight was 393 pounds — shy of the weight limits the park advertises as a requirement. Craig described the ride as "very, very rough," so much so that "when I got off, my head hurt."

The water park passed a private inspection in June that included Verruckt, according to a document released by a Kansas state agency. The Kansas Department of Labor provided to The Associated Press on Wednesday a copy of an insurance company inspector's June 7 letter saying inspections had been completed at Schlitterbahn Waterpark. The letter said all rides met guidelines for being insured with "no disqualifying conditions noted."

Kansas law requires rides to be inspected annually by the parks, and the state randomly audits the records. The last records audit for Schlitterbahn was June 2012.

Ken Martin, a Richmond, Virginia-based amusement park safety consultant, questioned whether the straps were appropriate, suggesting that a more solid restraint system that fits over the body — similar to those used in roller coasters — may have been better.

In early tests, rafts carrying sandbags flew off the slide, prompting engineers to tear down half the ride and reconfigure some angles. A promotional video about building the slide includes footage of two men riding a raft down a half size test model and going slightly airborne as it crests the top of the first big hill.

"I think ... they figured since stuff was flying out, we better do something to keep people from flying out," said Martin, who has not seen or tested the ride. "I think we have a serious issue with the restraint system. Period."

Jon Rust, a professor of textile engineering at North Carolina State University, said the material used on the straps, commonly called hook and loop, isn't designed to keep a person in the seat. It also can degrade with use.

"It's got to be used in a safe manner, and that doesn't include stopping someone's fall or preventing someone's ejection," Rust said.

Verruckt's 2014 opening repeatedly was delayed, though the operators didn't explain why. Two media sneak preview days in 2014 were canceled because of problems with a conveyor system that hauls the 100-pound rafts to the top.

Associated Press writers Bill Draper and Margaret Stafford in Kansas City and John Hanna in Topeka contributed to this report.