Hiker missing for 3 days shows up at own press conference

Video posted by the Tan Hill Inn shows hiker Harry Harvey being led into the pub by rescue officers and embraced by what appear to be emotional family members.

An 80-year-old man who disappeared while hiking in England on Saturday showed up at his own press conference Tuesday just as family members were about to organize a search party to find him.

A video posted on Facebook by the Tan Hill Inn, where the press conference was set to take place, shows octagenarian Harry Harvey being led into the pub by rescue officers and embraced by what appear to be emotional family members.

Inside the pub after reuniting with his family, he said he got separated from his group when they were caught in a heavy hail storm Saturday. Once he was on his own, he said he went to "plan B," which involved staying warm and safe.

“Where we got separated was absolutely desolate, there was no chance of putting a tent up, that’s for sure. So I had to find somewhere safe. That's what I did," he said.

In the three days he spent alone, he said he periodically saw some people far away, but couldn't reach them.

"I used my whistle, the distress call, but to no avail," he said. 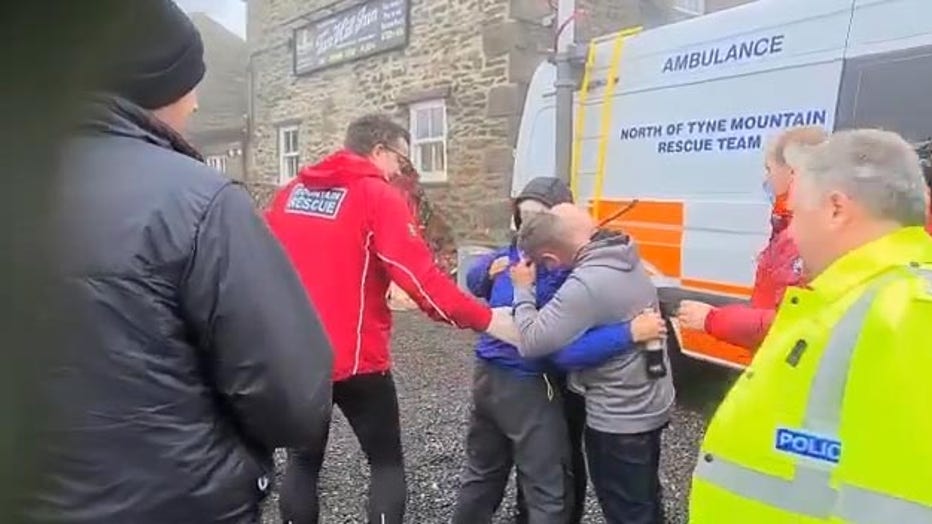 Video posted by the Tan Hill Inn shows Harry Harvey, 80, embracing a loved one after being separated from his group in a hail storm. (Photo credit: Tan Hill Inn via Storyful)

Harvey was well-prepared and relatively unscathed other than bumping his head at one point while trying to cross a stream and losing his glasses. His son said the family was relieved. "We know he's experienced, but not three days -- that's taking it a little bit to the extreme."

The North Yorkshire Police said that he was found by a wildlife photographer who noticed Harvey waving at her from a distance.

"I was out taking photographs of grouse and instead of grouse I found Harry," Annette Pyrah, the photographer who him said, according to the BBC.

"I had passed Tan Hill with a very heavy heart because I knew he hadn't been found, and I thought after three days he's not going to be found. It was quite upsetting to see the police and sniffer dogs,” she recalled. "I just looked up at the fell and this gentleman waved at me. I got out of my car and I said, 'Are you Harry? Have you been missing for three days?' And he said yes. And I started crying."

“If I’d have known, I wouldn’t have come back — not here,” Harvey said at the press conference broadcast by the inn on Facebook Live, joking that he would have taken a different route home to avoid the attention. “I could do without all of this.”

“This is fantastic news that Harry has been found safe and well," Local Inspector Mark Gee said Tuesday in a statement. "I want to thank all the search volunteers for their time, as well as Gamekeepers, estate owners, farmers and local residents for their help and understanding. Thanks also to the Tan Hill, who looked after the volunteers and Mr. Harvey’s family."

The Yorkshire Dales, where he was lost, features a "rolling landscape of lush dales (valleys), windswept hills like the famous Three Peaks and vast expanses of heather-covered moors," according to the National Park website.