A 16-year-old boy who authorities said shot five fellow students - killing two - before turning the gun on himself at a Southern California high school died on Friday afternoon.

The suspect, Nathaniel Tennosuke Berhow, 16, died at about 3:30 p.m. at a hospital with his mother present, the Los Angeles County Sheriff’s Department said.

Berhow allegedly pulled a gun from his backpack Thursday at Saugus High School in the Los Angeles suburb of Santa Clarita, shot five students at random and then fired the final bullet into his own head, authorities said. It was his 16th birthday.

The attack killed 15-year-old Gracie Muehlberger and 14-year-old Dominic Blackwell. Two girls remain hospitalized but are expected to be released this weekend.

The teenager allegedly opened fire after being dropped off by his mother at the school.

The shooting, captured on security video, took 16 seconds. The teen stood by himself, did not appear to interact with anyone and then walked to the center of the quad, Los Angeles County Sheriff Alex Villanueva said.

“As far as we know the actual targets were at random,” Villanueva said. 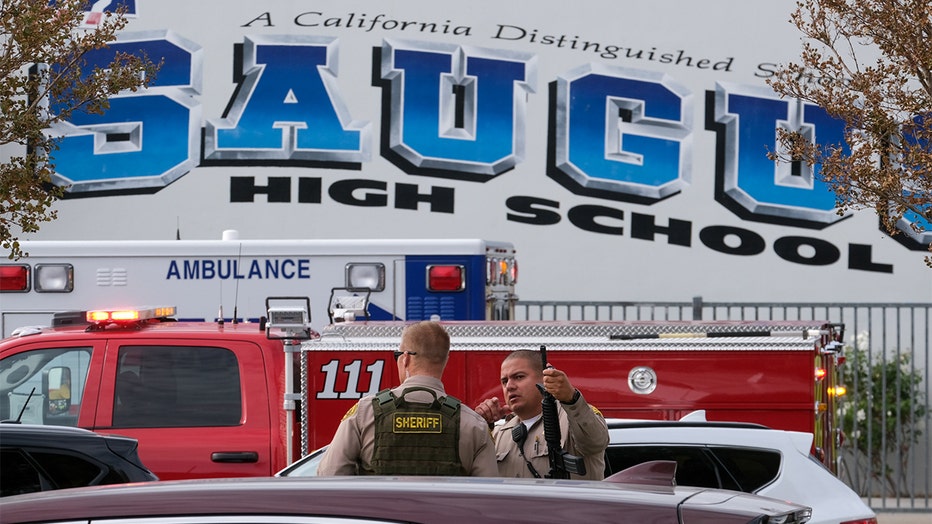 Sheriff deputies outside of Saugus high after a shooting occurred at the School in Santa Clarita, CA Thursday, November 14, 2019. (Photo by David Crane/MediaNews Group/Los Angeles Daily News via Getty Images)

The sheriff said the conclusion that the attack was planned was based on the shooter bringing the weapon, handling it with enough expertise and counting the rounds fired.

The origin of the gun was being investigated.

Three off-duty law enforcement officers were first on the scene and treated some of the wounded until paramedics arrived.

After more than 40 interviews and evaluation of evidence, no motive had been established, said Capt. Kent Wegener of the Los Angeles County Sheriff’s Department’s homicide unit. He said no manifesto, diary or suicide note had been found.

“It still remains a mystery why,” Villanueva said at a press conference.

With this boy, investigators have found “nothing out of the ordinary. He’s a cookie-cutter kid that you could find anywhere,” Villanueva said.

Friends said while the boy could be introverted, he had a girlfriend and good social network focused on his cross-country teammates.