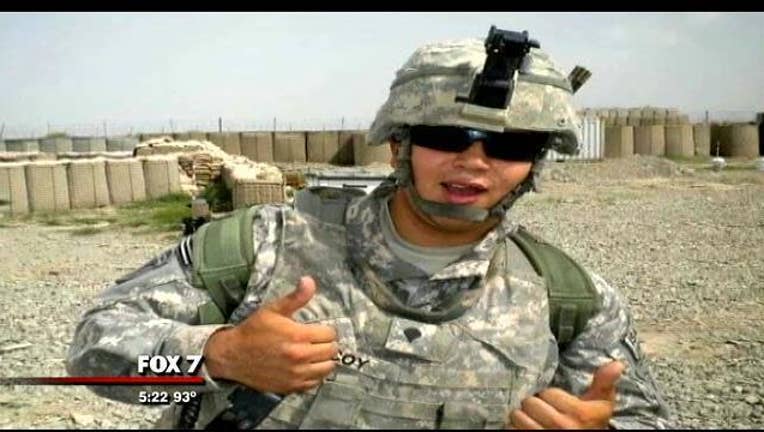 AUSTIN, Texas - Many vets talk about the sobering change when they go from military to civilian. In the military they say day to day life ordered, structured, and mapped out for you. In the civilian world you're on your own.

Even with some benefits if you don't have a solid plan when you get out homelessness is a real possibility. That's how it was for Kristopher McCoy.

When Kristopher McCoy was drawn down from the Army a few years ago civilian life came as a jolt.

"I was shocked by it getting out and there was no structure, order or brotherhood to fall back on. Nobody watching my back, so it wasn't the same really as being in the military," McCoy said.

McCoy wanted to go back to school but he wasn't sure how to make that happen. He was living hand to mouth on some benefits staying with one friend, then another, a veteran scenario repeated time and again.

"It's a vicious cycle. They can never get enough money together to be able to get into permanent housing because they're just trying to satisfy that day to day need," said Kay Fohn Caritas of Austin.

Fohn heads up their homeless vet program that's funded by the VA. She says there are about 260 homeless vets in Austin and Caritas is trying to change that.

"Our program focuses on vets will always be rent burdened and we have to help them get into housing that they're gonna be able to maintain. A lot of times that means we work with them on their budgeting. Maybe instead of spending more money on food, they use a food pantry," Fohn said.

Food pantries were a part of the plan for McCoy while Caritas helped him find student housing and get him enrolled at ACC. His benefits barely cover his tuition and living expenses. He's situated now, but it was the Caritas program that helped him with a budgeting plan, bus passes, some help on initial rent and deposits to get him through those first few weeks of getting set up when he need that extra support.

"They got me out of a rough spot. They gave me hope because when I was living with friends I didn't know what I was gonna do next and I found them, and they provided a lot of resources and helped me get to the next step of my life," McCoy said.

Caritas has had their vets program for three years. This year they expect get help about 150 homeless vets. They say the biggest challenge facing homeless vets is not enough affordable housing.