It looks like this cat used one of his nine lives after falling from a death-defying height. Video captured by Rodderick Harrison shows a cat falling in the Miami Hurricanes football stadium from one floor to the next.

MIAMI, Fla. - It looks like this cat used one of his nine lives after falling from a death-defying height.

Video captured by Rodderick Harrison on Saturday night shows a cat dangling from the upper deck in Hard Rock Stadium during the Miami Hurricanes home opener against Appalachian State. 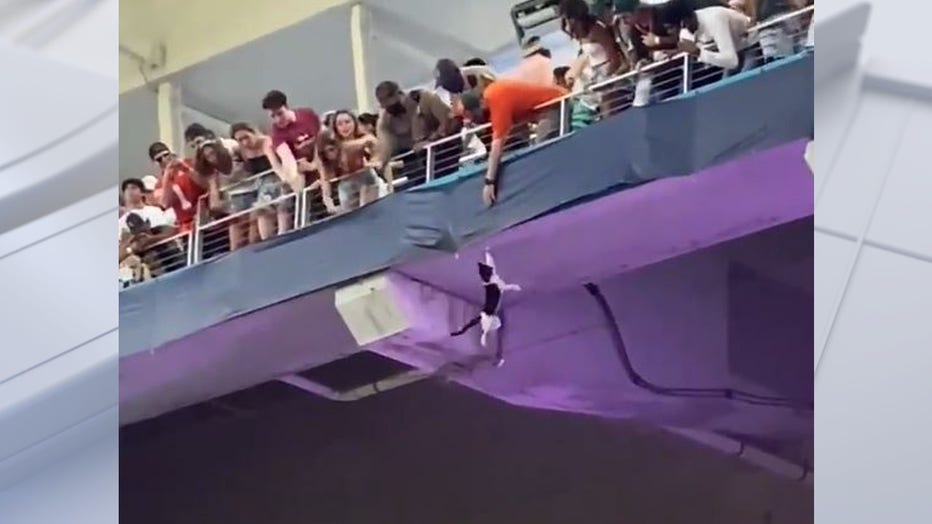 The cat ended up losing its grip and falling into the crowd below.

Fortunately, fans held open an American flag that helped break the feline's fall. One fan held the seemingly uninjured cat up in triumph as the stadium cheered.

Harrison said the cat was not hurt and that a woman at the end of the video who was seen trying to step over the railing to get the cat may be its owner.

That woman is seen at the end of the video holding the cat.

"We are happy that due to the heads up nature of fans in sections 107, 110 & 208 the cat landed safely after a harrowing fall. We wish the cat the best in his remaining eight lives. We have made a donation to @humanemiami and encourage fans to do so."