LOS ANGELES - A Lyft driver sitting in his car at a gas station was beaten and robbed at gunpoint; the entire incident was captured on video.

The crime occurred on May 10 after 9 p.m. at the ARCO gas station on Rosemead Blvd. in South El Monte.

The suspect was arrested about a week later, the sheriff's department announced.

According to the victim’s daughter-in-law, 67-year-old Paul Lao was refueling and washing his car when a man entered through the back seat and pointed a gun at him demanding him to hand over his wallet.

Video shared with FOX 11 shows the armed suspect waving a gun while talking with the victim. The suspect then steals his cellphone and cash. Christine, the victim’s daughter-in-law says he had about $1,560 in his pocket at the time. 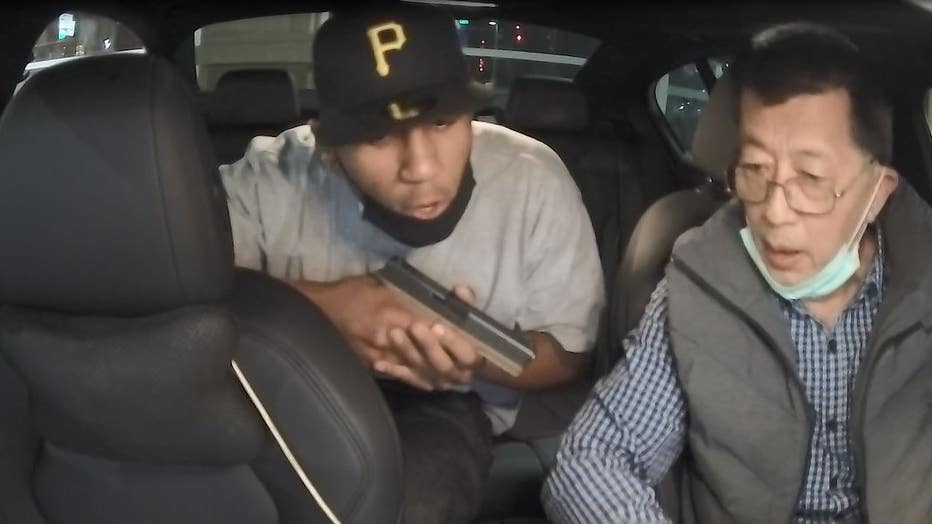 After taking the money the suspect then asked Lao to get out of his car and demanded the keys. But Lao told him his BMW is keyless and can only be driven by him. The suspect became angry and hit Lao on his face with the gun, then exited the car.

The victim suffered a fractured nose.

According to the Los Angeles County Sheriff’s Department, the victim went to the Temple City sheriff station hours after the incident occurred and made a report. He also turned over the video to detectives; Lao says he got a dashcam for protection but disabled the microphone because state law requires consent to record audio.

Days after the attack, Lao's injuries are still visible and he says the pain is keeping him up at night.

A GoFundMe has been set up for him by family.

A week later, on May 19, the Los Angeles Sheriff’s Department says an arrest has been made.

A press conference is scheduled for Thursday, May 20 where law enforcement officials will provide additional details on the arrest.