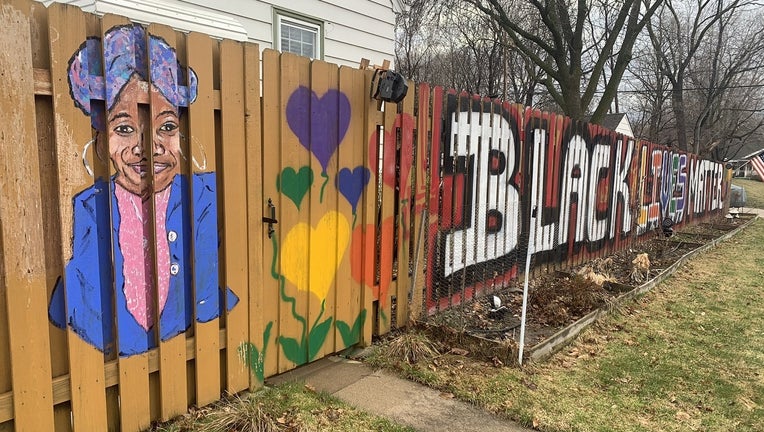 WEST ST. PAUL, Minn. (FOX 9) - The City of West St. Paul says a Black Lives Matter mural painted on a fence in the city has to be painted over, or the homeowners will face a fine.

The City of West St. Paul says a Black Lives Matter mural painted on a fence in the city has to be painted over, or the homeowners will face a fine.

"We thought this was an appropriate way to get a visual message out," said Weyandt.

Weyandt and his husband couldn’t stay quiet last summer after George Floyd’s death and unrest in the cities -- so they spoke out through the mural, a Black Lives Matter message painted by two local artists.

"We had hoped if it just made one person who had to pause at this stop sign and think," said Weyandt, "that that would really fulfill what we were trying to do."

It’s caught the eye of many in the community, including some neighbors who didn’t like the mural and called it into the city.

"Turns out there is both a sign ordinance and a fence ordinance in town," said Weyandt.

Now, Weyandt says they have until April 15 to paint over it or pay a fine.

"We have had other messages on this fence for three years and this is the first time we’ve ever gotten a citation for it," said Weyandt.

Community activist and former mayoral candidate KaeJae Johnson, whose face is also part of the fence artwork, wants to see it stay.

"This is about my life, this is saying, this is telling my granddaughter that it matters that she lives in West St. Paul," said Johnson. "It's telling her she’s welcome here."

Johnson tells us messages like this are needed to make sure the Black community knows they matter and are important in West St. Paul.

"This is what we’re aiming West St. Paul to be," added Johnson. "Has it changed on so many levels, absolutely, but it’s not there yet why is it not there yet? Because they’re asking him to take it down."

We did hear back Thursday from the City of West St. Paul, who told us in a statement the fence does not comply with city code which states: "Fences shall not contain pictures or lettering and shall be one uniform color."

Signs also cannot be fixed on fences, adding that: "…the City cannot and does not take content or message into account when dealing with infractions of City Code. All City Code, as well as enforcement, is content neutral."

Weyandt tells us if he does not comply, he will face fines of about $250 dollars a day. But he has had offers from lots of people who can come help paint.