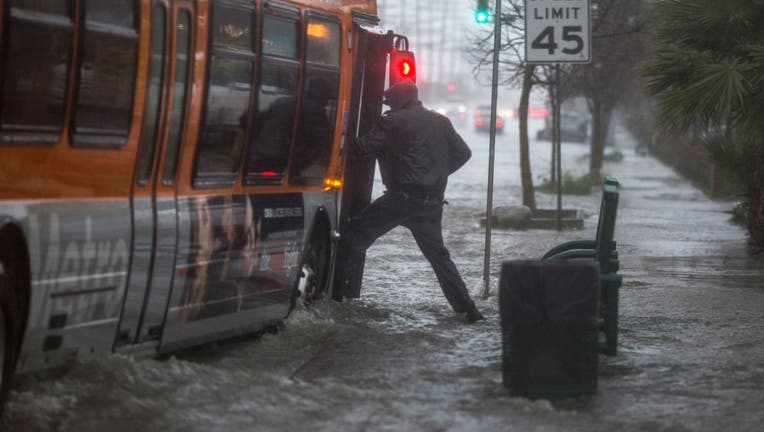 SUN VALLEY, CA - FEBRUARY 17: A man boards a bus on a flooded street as a powerful storm moves across Southern California on February 17, 2017 near Sun Valley, California. After years of severe drought, heavy winter rains have come to the state, and

LOS ANGELES - Climate change has doubled the potential for a "catastrophic" flooding event in California, and further warming could increase that chance even more, according to a new study from researchers at the University of California, Los Angeles. Such a "megaflood" could "lead to the displacement of millions of people, the long-term closure of critical transportation corridors and ultimately to nearly $1 trillion in overall economic losses."

California has been synonymous with drought in recent decades. According to the state, the majority of California is currently experiencing between "moderate" and "extreme" drought conditions. However, the study published Friday in the journal Science Advances says that the state has "a broadly underappreciated risk of severe floods" as well.

Researchers used a weather model to simulate what they called a "megastorm event," a worst-case scenario over a 30-day period of precipitation. Climate change has already increased the intensity of rainfall along the Pacific coast of North America, the study says. Increased temperatures also cause snow to pack on mountains at higher elevations on average, and increase the likelihood of rain as opposed to snow. Combining all those factors, researchers say, increases runoff rates which can lead to flash flooding.

"This is especially true in the vicinity of large or high-intensity wildfire burn areas, which are themselves increasing due to climate change," the authors write.

The authors stress that a "megaflood" like this is the worst case scenario, and that there are already steps available to mitigate the risks of such a flood, including floodplain restoration, levee setbacks, increased forecasting for reservoir operators and evacuation plans that take into account the potential for sustained transportation interruptions. The study concludes by saying that "recognizing and mitigating the societal risks associated with this subtly but substantially escalating natural hazard is a critically important consideration from a climate adaptation perspective."