WASHINGTON - The Biden administration is taking steps to address the economic risks from climate change, issuing a 40-page report Friday on government-wide plans to protect the financial, insurance and housing markets and the savings of American families.

It's a follow-up to a May executive order by President Joe Biden that essentially calls on the government to analyze how the world's largest economy could be affected by extreme heat, flooding, storms, wildfires and the broader adjustments needed to address climate change.

"If this year has shown us anything, it’s that climate change poses an ongoing urgent and systemic risk to our economy and to the lives and livelihoods of everyday Americans, and we must act now," Gina McCarthy, the White House national climate adviser, told reporters.

RELATED: Hurricane Ida hits Louisiana as one of most powerful hurricanes to strike US

The actions being recommended by the Biden administration reflect a significant shift in the broader discussion about climate change, suggesting that the nation must prepare for the costs that families, investors and governments will bear. 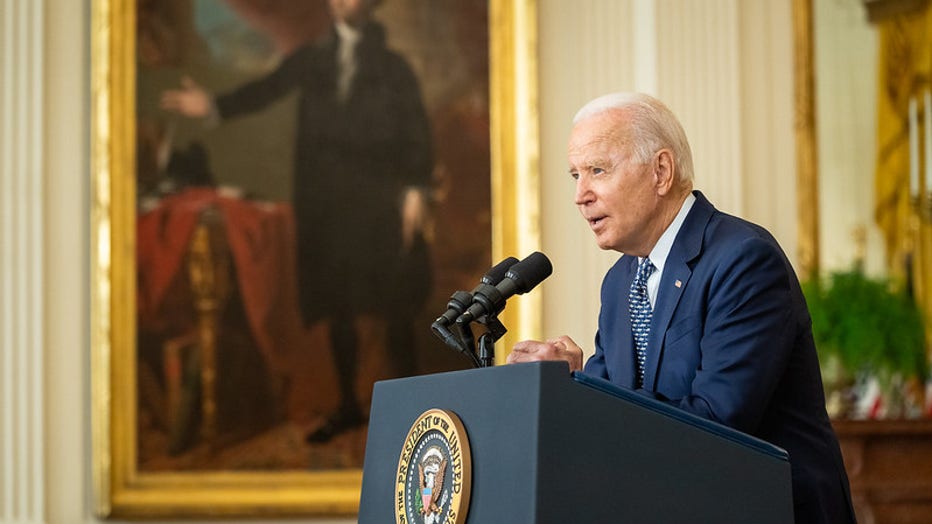 FILE - President Joe Biden delivers remarks on the passing of the bipartisan Infrastructure Investment and Jobs Act on Aug. 10, 2021, in the East Room of the White House. (Official White House Photo by Adam Schultz)

The report is also an effort to showcase to the world how serious the U.S. government is about tackling climate change ahead of the United Nations Climate Change Conference running from Oct. 31 to Nov. 12 in Glasgow, Scotland.

Among the steps outlined is the government's Financial Stability Oversight Council developing the tools to identify and lessen climate-related risks to the economy.

The Treasury Department plans to address the risks to the insurance sector and the availability of coverage. The Securities and Exchange Commission is looking at mandatory disclosure rules about the opportunities and risks generated by climate change.

The Labor Department on Wednesday proposed a rule for investment managers to factor environmental decisions into the choices made for pensions and retirement savings. The Office of Management and Budget announced the government will begin the process of asking federal agencies to consider greenhouse gas emissions from the companies providing supplies. Biden's budget proposal for fiscal 2023 will feature an assessment of climate risks.

Federal agencies involved in lending and mortgages for homes are looking for the impact on the housing market, with the Department of Housing and Urban Development and its partners developing disclosures for homebuyers and flood and climate-related risks. The Department of Veterans Affairs will also look at climate risks for its home lending program.

The Federal Emergency Management Agency is updating the standards for its National Flood Insurance Program, potentially revising guidelines that go back to 1976.

"We now do recognize that climate change is a systemic risk," McCarthy said. "We have to look fundamentally at the way the federal government does its job and how we look at the finance system and its stability."

RELATED: California fires may have killed hundreds of giant sequoias