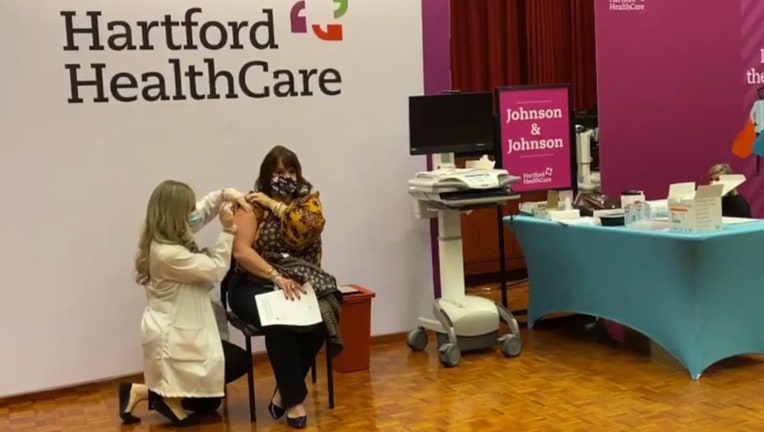 A healthcare worker gives a shot of the Johnson & Johnson vaccine to a person at Hartford Hospital in Hartford, Conn., March 4, 2021. (Hartford HealthCare via Storyful)

CONNECTICUT - Connecticut Gov. Ned Lamont announced Thursday that the state would be easing some of its COVID-19 restrictions.

Beginning Friday, March 19, all capacity limits will be eliminated for restaurants, retail, libraries, personal services, indoor recreation, gyms/fitness centers, museums, aquariums, zoos, offices, and houses of worship. Restaurants will still have to close dining rooms at 11 p.m. and seat no more than eight people per table.

The state's restrictions for incoming travelers — including a 10-day quarantine — will become an advisory rather than be mandatory.

"I think Connecticut has earned it. You know, it's been tough and people have been frustrated. They've been sheltered at home," Lamont said. "A lot of our businesses really suffered, and people took a hit. ... So I'll tell ya. It feels pretty good. It feels good that we're able to do this."

Lamont stressed what while some of the restrictions are being eased, protocols related to face coverings, social distancing, and cleaning measures are being maintained.

Bars that only serve beverages will continue to remain closed in the state, while an 11 p.m. closing time remains in place for events at venues, restaurants, and entertainment. Indoor theaters can continue to operate at a 50% capacity.

"While it is encouraging to see the number of cases in our state gradually going down and people getting vaccinated at rates that are among the highest in the nation, we need to continue taking this virus seriously to mitigate its spread as much as possible," Lamont said in a statement. "Please continue to wear face coverings in public and when around other people outside of your households, maintain social distancing, and keep washing your hands and cleaning surfaces. Connecticut has made tremendous strides to combat this pandemic, and we don't want to lose the progress that we’ve made."

Lamont said the state is making progress in its vaccination efforts. More than a million doses have been given. So far, about three-quarters of the state's 75-and-older population have received the vaccine, 59% of residents 65 to 74, and 17% of people 55 to 64.

Protocols that will remain in effect until further notice include:

This story has been updated to correct the date when capacity limits will be lifted.