Study finds how much it costs to own a pet

A website calculated the average one-time, annual and lifetime costs associated with owning a dog, cat, bird and reptile.

CINCINNATI - There’s no doubt about it, pets bring people joy — and pet owners often don’t blink an eye at the costs associated with raising a four-legged family member when considering the unconditional love they provide.

But still, owning a pet can be expensive. From food, to toys, to medical bills — the price of a beloved dog or cat over time can really add up.

Credit Card Compare, an online website that compares the benefits of various credit card options for consumers, calculated how much dogs, cats, birds and reptiles can cost their owners over time in the United States, as well as in 11 other countries around the world.

In the U.S., the one-time cost of owning a dog on average was found to be $700, which includes buying or adopting the pet, spaying or neutering, buying a collar, leash, crate, bed and training expenses. The annual cost on average, considering food, vet bills, grooming, toys and pet insurance, was found to be $1,180.

The lifetime cost of owning a dog in the United States was found to be $14,860, considering an average lifespan of 11 years. 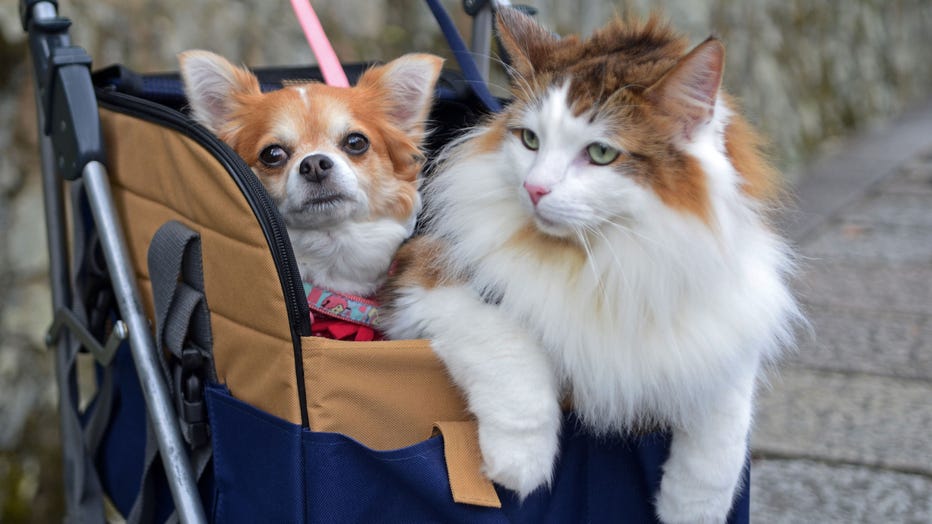 A dog and cat shown in a file image being carriage together in a baby carriage. (Photo by: VWPICS/Nano Calvo/Universal Images Group via Getty Images)

Credit Card Compare said its findings were based on data from surveys of pet owners, veterinary websites, online pet stores and more.

On the flip side, dog owners in India pay only an average of $3,180 USD over the course of their dog's life — a country found to have the fastest growing dog population in the world.

In Japan, owning a feline friend and purchasing all that kitty litter will set you back $20,850 USD in lifetime costs, followed by $18,682 USD for cat owners in Canada and $16,081 USD for those in South Africa.

In the U.S., approximately 68 percent of households currently own a pet, up from 56 percent in 1988, according to the National Pet Owners Survey by the American Pet Products Association.

But when it comes to caring for an animal companion, can you really put a price tag on love?