To this point, no decision has been made in court regarding baby Tinslee. However, the hospital where she is being treated filed its response to the latest pleading.

FORT WORTH, Texas - A doctor from outside of the state wants to perform an invasive procedure on a little girl who remains on life support at Cook Children's in Fort Worth.

The hospital argues 1-year-old Tinslee Lewis is suffering and cannot live. But her family found a doctor in Michigan who wants to give her a tracheotomy.

To this point, no decision has been made from Tarrant County’s 48th district court regarding the toddler, whose life remains the focus of court filings. However, the hospital where she is being treated filed its response to the latest pleading.

The family petition on behalf of Tinslee requested the court to allow a Michigan doctor along with another physician to perform a tracheotomy.

In its response, the Cook Children’s urges the court to deny the request, saying: “Plaintiffs now ask the court to let them cause even more pain to this patient for no medical benefit. Not only is this motion procedurally flawed, but it is utterly unmeritorious and presents the court with false and unsupportable factual claims.” 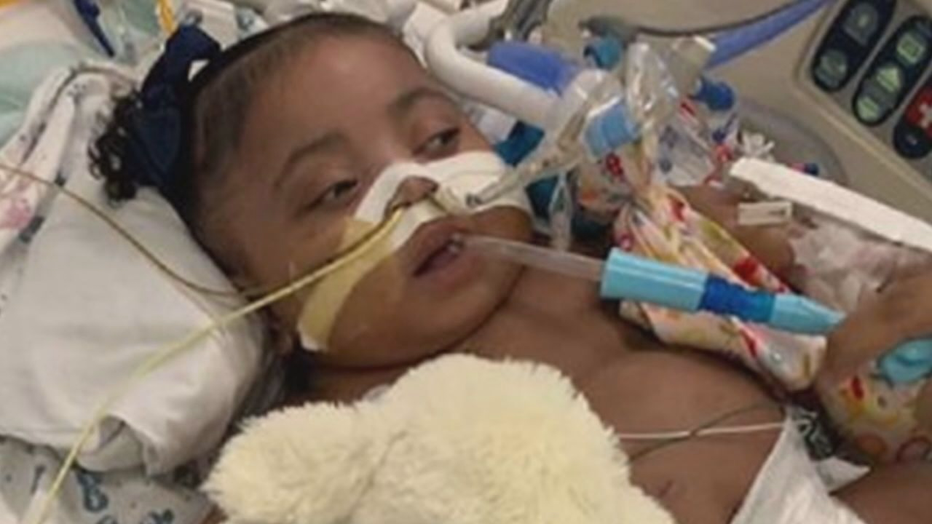 Kim Schwartz is with Texas Right to Life, which has supported Tinslee’s mother, Trinity Lewis.

“Cook Children’s does not want to do the procedure. But without it being done by these two new doctors, she can’t be transferred. There’s not that possibility,” Schwartz said. “So by trying to block the motion, it’s like Cook Children’s doesn’t want anything to be done at all.”

The family’s court filing indicates Dr. Glenn Green of the University of Michigan believes a tracheotomy would facilitate Tinslee being transferred to a long term care facility and possibly remedy a condition the hospital calls “dying spells.”

The hospital’s response includes information regarding Tinslee’s care, noting that she suffers from incurable heart and lung conditions and is in constant pain. It also says Tinslee receives 40 different medications per day.

Further in its dispute, the hospital points out Dr. Green does not have a Texas medical license and has not sought a temporary one. The hospital says a Cook Children’s doctor would have to oversee the procedure, which is a process it says would be illegal.

Texas Right to Life says the hospital’s defiance is unfortunate.

“It’s important to remember Trinity, as Tinslee’s mother, should have the right to the final say with these procedures, especially since the goal of this procedure is to facilitate Tinslee’s life and a possible transfer,” Schwartz said.

Months ago, Cook Children’s was stripped of permission to make any public statements about Tinslee. That was the desire of her mother.