President Biden and Sectary of State Antony Blinken host an energy and climate forum. The U.S. is asking other countries to slash by at least 30% in the next decade. LiveNOW from FOX | Raw & unfiltered news

LONDON (AP) - Climate activist Lavetanalagi Seru has been watching COVID-19 case numbers rise in the U.K. ahead of the U.N. climate conference beginning Sunday, and it scares him — even though he’s been vaccinated and is only 29.

But the campaigner from the Pacific Islands Climate Action Network is determined to travel from his home in Fiji to Scotland to bring attention to the plight of island nations being battered by climate change.

"It’s a scary time to be traveling,’’ he told The Associated Press. "But I’m putting my health at risk to make sure Pacific Island states are heard.''

Despite the concerns of some of the delegates from around the world, the British government decided to hold an in-person conference, arguing that world leaders must act now to prevent catastrophic global warming — and that they will be more effective if they can talk face-to-face. The meeting was originally scheduled to be held last year but was postponed due to the pandemic.

The government insists it can now be done safely — and said it had worked "tirelessly'' to ensure an inclusive, accessible and safe summit in Glasgow "with a comprehensive set of COVID-mitigation measures.''

"COP26 has already been postponed by one year,'' Alok Sharma, the president-designate of the conference known as COP26, said last month. "And we are all too aware climate change has not taken time off.''

But a coalition of environmental and community groups in September called for the conference to be pushed back again amid concern that many of those most affected by global warming wouldn’t be able to attend because of the continuing threat of COVID-19. Those fears have been heightened by a surge in infections across the U.K., where the daily average of confirmed new cases has jumped more than 50% since mid-September.

Campaigners also complain that organizers still haven't done enough to ensure broad participation. Documents outlining the paperwork necessary to attend came late for some who needed to travel long distances and at great expense, among other issues.

A failure to cut red tape has made it difficult for civil society activists to get the visas they need to travel. Seru, for example, is still waiting for his.

In addition, although vaccines were promised for delegates, the campaigners argued the rollout was too slow — highlighting broader issues of vaccine inequity that they largely blame on rich nations, including the U.S., Britain and the European Union, that have stockpiled vaccines for their own citizens. 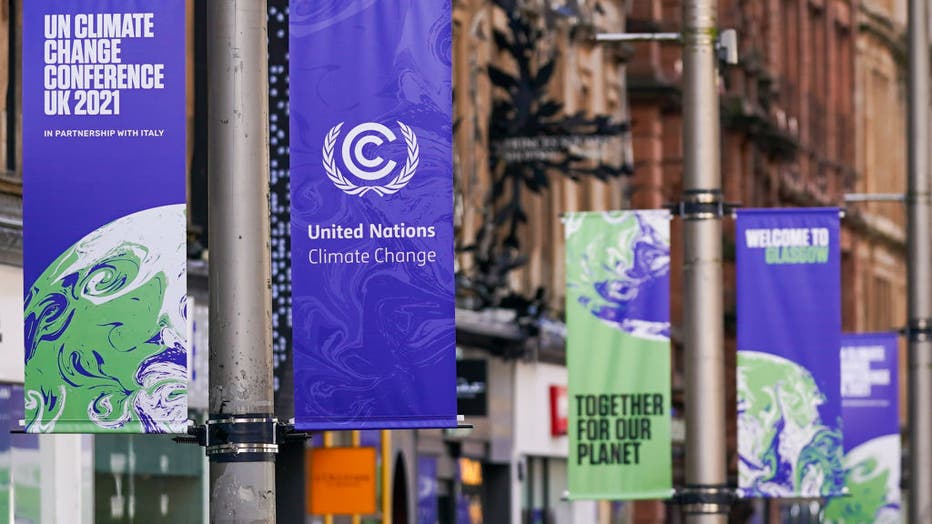 "As one of the millions of unvaccinated Africans, the thought of traveling to Scotland, where cases recently spiked, is a scary one," Mohamed Adow, director of the climate and energy think tank Power Shift Africa, wrote Sept. 14 in an opinion piece for the Guardian. "The frustrating thing is that it didn’t need to be this way."

He accused rich countries of hoarding vaccines and blamed their failure to waive certain intellectual property rights on the shots that could allow more countries, particularly poorer ones, to produce COVID-19 doses.

While some nongovernmental organizations have called the waivers vital and the U.S. has embraced the idea, some experts doubt waivers for the highly complex shots would boost production. But many agree that richer countries have fallen short in their promises to share vaccines broadly, even as they approve booster shots for their own citizens.

The upcoming meeting in Scotland comes after an international panel of climate scientists issued a stark warning to world leaders in August, saying time was running out to meet the goal of limiting global temperature increases to 1.5 degrees Celsius (2.7 degrees Fahrenheit) and avert catastrophic climate change. COP26 is seen as a critical moment in the drive to persuade governments, industry and investors around the world to make ambitious commitments on reducing greenhouse gas emissions.

Waiting another year may delay action beyond the point of no return, said Bob Ward, policy director of the Grantham Research Institute on Climate Change and the Environment at the London School of Economics. Being in the same room matters to getting a deal.

"Despite the risks of being together in Glasgow, it’s justified given how dangerous the situation we’re in on climate change,’’ he said. "If we get it wrong on climate change, it’s not just the negotiators who will be in trouble, it will be all of us. The whole world — our children, our grandchildren, future generations. It’s that dire."

Gurch Randhawa, a professor of diversity and public health at the University of Bedfordshire, said the conference — like any other meeting — can be held safely as long as COVID-19 security measures such as social distancing, proper ventilation and masks are employed. But those rules must apply to everyone, unlike in Britain’s House of Commons where staff members and journalists are required to wear masks, but lawmakers aren’t, he said.

The conference may actually provide an opportunity for world leaders to demonstrate the need to control the virus through continued safety measures, Randhawa said.

Meanwhile, Seru is still hoping his long-promised visa will arrive soon. He has already missed one very expensive flight, but he will get another. He might be late, but he's determined to get there.

"For the Pacific, this is a matter of life and death,'' he said. "That’s why we are fighting so hard.''