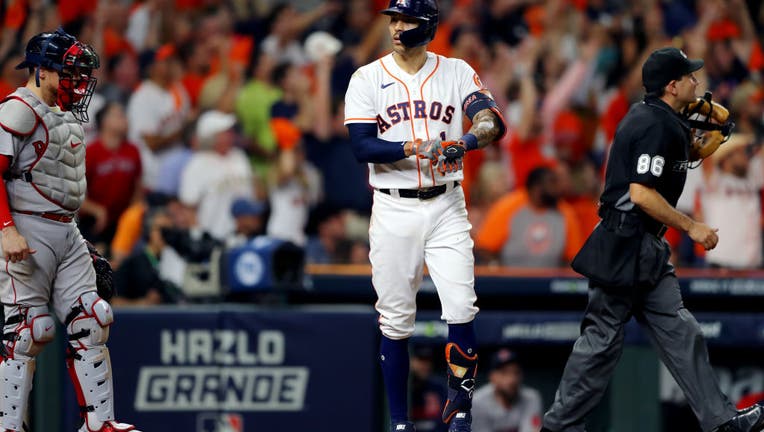 HOUSTON, TX - OCTOBER 15: Carlos Correa #1 of the Houston Astros reacts to hitting a solo home run in the seventh inning during Game 1 of the ALCS between the Boston Red Sox and the Houston Astros at Minute Maid Park on Friday, October 15, 2021 in Ho

HOUSTON (AP) - Carlos Correa paused a few seconds at the plate, tapping the spot on his wrist where a watch would be, after hitting a tiebreaking home run in the seventh inning that propelled the Houston Astros over the Boston Red Sox 5-4 Friday night in the AL Championship Series opener.

"It’s my time," he screamed before trotting around the bases.

And if his time with the Astros runs out at the end of this season, the star shortstop sure is making this an October to remember.

Correa teamed with Jose Altuve to do just enough to overcome the heroics of Kiké Hernández, who starred with his bat and glove for the wild-card Red Sox.

Altuve tied the game with a two-run shot in the sixth before Correa connected off losing pitcher Hansel Robles with two outs in the seventh to put the Astros ahead 4-3.

Correa, who has been with the Astros since being selected first overall in 2012, becomes a free agent at season’s end and it seems likely that he won’t remain in Houston.

Hernández, who won a World Series with the Dodgers last year, homered twice among his four hits and likely saved multiple runs with two terrific catches.

Astros fans beyond excited after win in ALCS opener

After an electrifying win for the Astros in Game 1 scoring 5-4 against the Red Sox, fans were absolutely thrilled. FOX 26's Matthew Seedorff was in the midst of the celebrations at Minute Maid Park.

His second homer came off closer Ryan Pressly to start the ninth and cut the lead to 5-4. But Pressly retired the next three batters to get the save.

Game 2 is Saturday in Houston.

Fans are riding high from an electric win during the ALCS opener and FOX 26’s Coco Dominguez was at a watch party in Kirby, Texas where she got to join in on the excitement!