Officer Larkin recounted the sidesplitting story on the North Ridgeview Police Department Facebook page, where it as shared over 3,000 times in the first three hours.

As Larkin was getting into his cruiser Tuesday afternoon, he was surprised to hear North Ridgeville police dispatch wish his fellow officer, John Metzo, good luck.

His interest piqued, Larkin couldn’t help but open the call screen in his cruiser. Upon seeing the note describing the incident, he knew he had to join Metzo on the call.

“A cow fell out of a truck,” the note on his call screen read.

“Wait. What?” Larkin wrote in his post. “I’m enroute. I am soooo enroute.”

When he arrived on scene, he learned that a trailer being pulled by a truck had opened while in transit. A cow had escaped out of the trailer’s open back door, “Unscathed, and making a concerted effort at freedom,” Larkin wrote.

“Officer Ryan Jones is now there and they are trying to corral the fastest cow I’ve ever seen, though in fairness, my experience with cows is quite limited,” Larkin wrote. 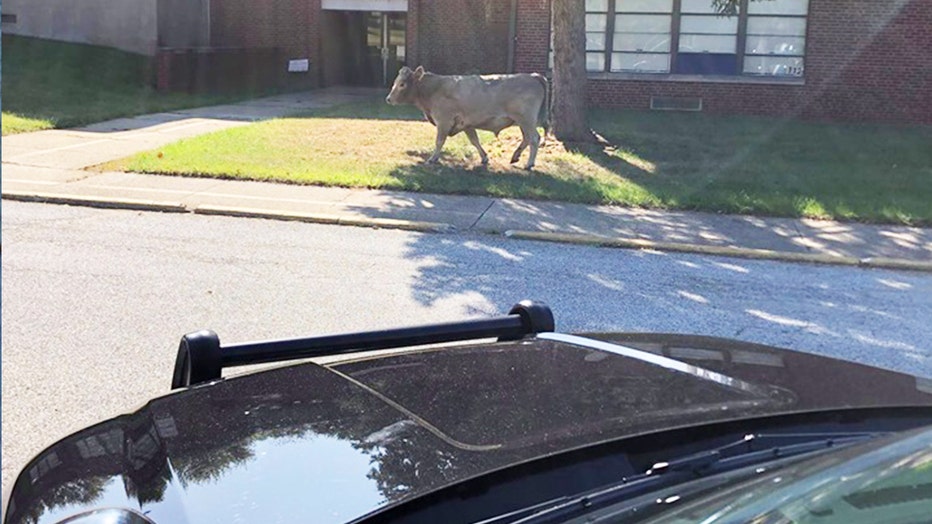 “We go left, he goes right. We go right, he goes left. He manages to get across Root Rd with three cruisers trying to corral him before he fights a Subaru. We chase him straight into the open garage of Worcester’s. End game.”

Larkin thought they had bested the beast, but he and his fellow officers were celebrating too soon.

“As we’re congratulating ourselves on being cowboys, he runs out of the open back door. Son of a....Back in pursuit,” wrote Larkin.

The cow then managed to run to an embankment of SR 10, where he managed to locate the only hole in the perimeter fence. The cow was then headed for the highway.

“Bad. Very bad,” Larkin recounted thinking. “Ryan has a decision to make, and he chooses ninja warrior over the other. He sprints up the embankment, heads him off, and talks him out of being murdered by a semi.”

With the cow now heading away from the freeway, Larkin wrote that he and his fellow officers were able to “corral him while driving our trusty steeds....well, Police Interceptors, through a really nice and understanding farmer’s soybean field. (Sorry again).”

Just when it seemed that the pursuit was never going to end, the cow’s owner showed up and implemented a rescue tactic that left the officers baffled. The owner let two more cows loose, which Larkin said seemed “like an absolutely horrible idea, though again reference our lack of cow herding education.”

Much to the officers’ surprise, the owner’s tactic worked.“Our fugitive cow runs over to the other two,” wrote Larkin. “After some negotiation, they convince him to get back in the trailer before things get worse.”

While the officers discussed their inability to get a rope on the cow during the attempted rescue, the owner revealed the cow’s incredibly fitting name.

“No joke. I swear to you this is his name,” wrote Larkin. “Moodini.”

“I literally could not have made that up if I wanted to,” Larkin admitted.

After what may well have been the most exciting day of Moodini’s life, he ended up back safely where he belonged.

Larkin assured the public that no one was hurt — neither human nor animal — during the chase, concluding, “The citizens can once again sleep peacefully knowing they will not be trampled to death by a cow while checking their mail...Rest easy citizens. Rest easy.”

In the first three hours that Larkin’s post was visible on the North Ridgeville Police Department’s Facebook page, it was shared more than 3,000 times. Many of those commenting on the post couldn’t get enough of Larkin’s storytelling, which can be read in full below.