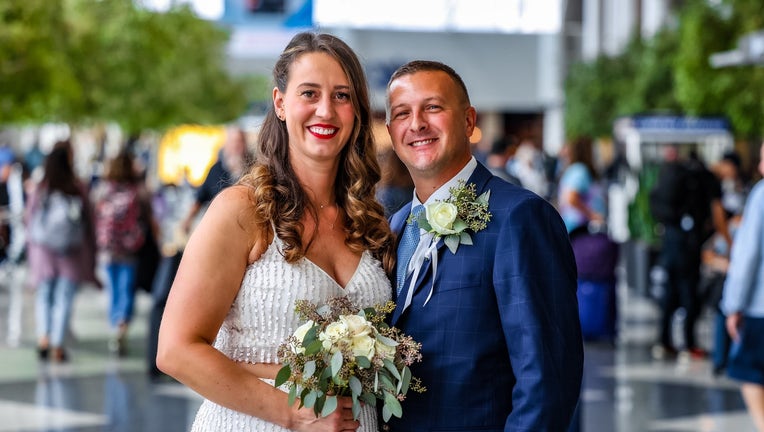 CHARLOTTE, N.C. - Love was in the air when Liz Evers and Adam Johnson first met on a flight. Love was also on the concourse when they tied the knot inside Charlotte Douglas International Airport in North Carolina last Friday.

The airport shared the event on its Facebook page.

"Wishing the newlyweds a lifetime of adventures," airport officials posted.

RELATED: As weddings return, couples aim to go big in 2022

According to the Facebook post, Evers, 38, and Johnson, 41,  met on Mother’s Day 2021 when they were booked on an American Airlines flight from their hometown of Cleveland, Ohio, to Charlotte.

Evers then moved to an empty seat next to Johnson and then destiny took it from there.

"She is very outgoing and our personalities are a lot alike," Johnson told FOX Television Stations. "Most say opposites attract but not in our case."

After sharing an instant connection and talking non-stop on the 90-minute flight, they exchanged numbers once they landed.

Johnson said they talked about "everything from growing up Cleveland, the pandemic, and how she had to close her business for weeks on end, and every other 'first date question/answer' you can imagine."

Getting married at the airport seemed like an obvious choice for the couple.

"We wanted something small, intimate, cheap, and easy. It was also very fitting since we met on an AA [American Airlines] flight and CLT [Charlotte Douglas International Airport] is a hub," Johnson continued.

"We couldn’t stop smiling! Even with all the people stopping to watch we felt like it was just us and the chaplain," he added.

Johnson said immediately after the wedding, random strangers bought them drinks before they hoped on a flight to Florida stopping in Fort Meyers.  Another couple gave them $100 for dinner as a gift.

The couple, who reside in Rock Hill, South Carolina, said they also spent time on Marco Island before going back to Cleveland to visit family and friends.

Watch skiers get married on mountaintop amid snowstorm .

Molly Lemke Healy and Matt Gnoza tied the knot in Vermont in March.

"Be open, be outgoing, be yourself, and don’t give up!" he said. "When you're traveling, get off your phone and engage with people."

Getting married inside an airport isn’t unheard of.

In September 2020, Chase Thomas and Emily Zilich were married at the Louis Armstrong New Orleans International Airport before going on their honeymoon. They canceled their first wedding date because of the COVID-19 pandemic. The couple said they always wanted to get married in New Orleans and their guests attended the wedding via Zoom.