Gov. DeSantis spoke to attendees at CPAC in Orlando on Friday.

ORLANDO, Fla. - The Conservative Political Action Conference, also known as CPAC, is underway in Central Florida with a number of high-profile conservatives scheduled to take the stage this weekend.

All the speeches culminate with former President Donald Trump's appearance on Sunday, which will be his first public appearance since leaving office more than one month ago.

The conference is being held at the Hyatt Regency Hotel in Orlando with thousands of conservatives from around the country in attendance.

DeSantis touted Florida's success during the coronavirus pandemic, pointing out how the state reopened in phases instead of staying locked down and that the unemployment rate is lower than the national average.

"Every Floridian has a right to earn a living and all businesses have a right to operate," DeSantis said. "Florida got it right and the lockdown states got it wrong."

CPAC kicks off in Orlando

The Conservative Political Action Conference kicked off in Orlando on Thursday.

Political experts say they will be listening closely for any early signs that someone might make a campaign announcement for 2024.

On Sunday, Trump is expected to use the speech to talk about the future of the Republican Party and the conservative moment, as well as to criticize President Joe Biden’s efforts to undo his immigration policies, according to a person who spoke on condition of anonymity to discuss the plans.

"Republicans are trying to figure out, as they move ahead: Is this still the party of President Trump, or will new leadership arise to take over after him?" said Aubrey Jewett, professor of political science at the University of Central Florida. 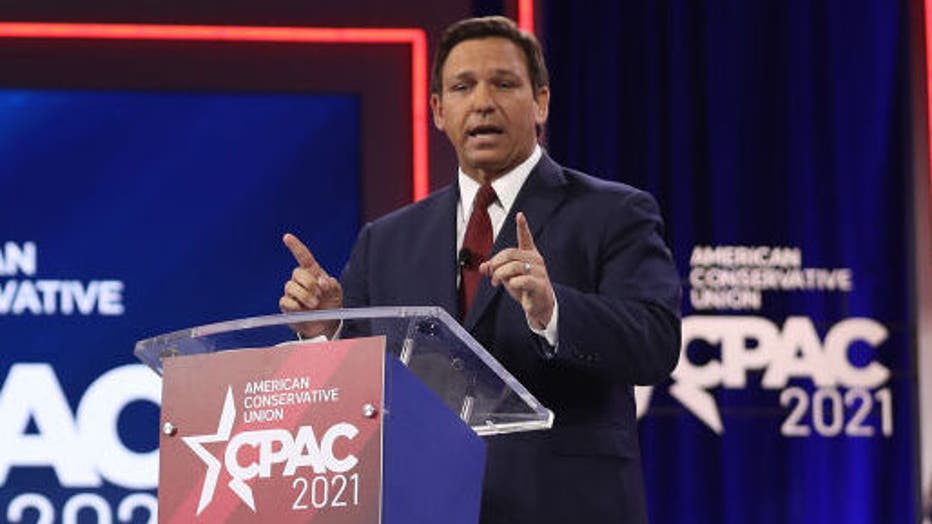 Trump has been keeping a relatively low profile since he retired from the White House to Palm Beach, Florida, in January, but reemerged last week to conduct a series of phone-in interviews to commemorate the death of conservative commentator Rush Limbaugh. Limbaugh will be honored at the event this weekend.

As far as COVID-19 safety measures, hotel staff is policing the event to make sure the policies are followed, including wearing masks.

It’s just one of the many health and safety measures in place before you get into the conference. Guests must pass a health questionnaire and temperature check.

RELATED: Who is speaking at the Conservative Political Action Conference in Florida

"I think they are pointless and useless," said  Jonathan Koeppel, CPAC attendee.

Koeppel said people could lie on the questionnaire and the thermometers could be inaccurate.

Once inside, hand sanitizer, social distancing floor markings, and signage will remind attendees of healthy practices. Seating is either spaced out or in pods of four.

"I understand that the hotel is between a rock and a hard place, CPAC is too," said Barbara Vaughn, CPAC attendee. "We have to play by the rules, while we’re here."

Watch FOX 35 News for complete coverage of CPAC this weekend. Get breaking news alerts in the FOX 35 News app. Download for iOS or Android