DUBLIN, Calif. - A trio of Congressional leaders on Monday toured a federal Dublin prison embroiled in a national scandal after four correctional officers – including the former warden – were charged with sex crimes and one of the formerly incarcerated women is now alleging that one of guards preyed on her by digging into her confidential files, too.

U.S. Congress members Eric Swalwell, Jackie Speier and Karen Bass – all Democrats from California – got a private walk-through of the federal all-women's prison, located next to Santa Rita Jail, about 40 miles east of San Francisco. They wanted to see for themselves what is going on.

Swalwell said that on the short trip, they were able to interview some staff members and speak to some women inside.

"I was here a month ago," Speier told reporters outside the prison. "And I was prevented from speaking privately with inmates. I made it very clear we would return. And we returned. This prison is a cultural, toxic environment. You have got a cultural rot in this institution that must be addressed."

Speier also addressed the reprisals that incarcerated people and staffers have reported receiving for speaking out about abuses. And she noted that on the day of the tour, there were "surprisingly, cameras being installed where they had been blind spots and where many of these sexual assaults have occurred."

(An employee later told KTVU that the cameras were not yet installed, but there is a proposal to do so.)

Speier said that after speaking with the incarcerated prison, they told her that FCI Dublin is "the worst one" out of the seven all-women's prisons in the country by far.

And Speier vowed it would change.

"It's under the microscope now," Speier said.

Congresswoman Karen Bass also spoke, saying she planned to introduce legislation that would help rehabilitate women instead of punish them.

"The criminal justice system is not designed for women," Bass said.

He said the misconduct at FBCI Dublin has "been going on for years" and he fully supported the oversight by Congress. He said his union has been trying to replace guards who don't take these problems seriously.

"We have a great staff here," he said. "Unfortunately, there are bad eggs who disgraced us."

Kostelnik said that overall "negligence" led FCI Dublin to where it is today. And he said he wants the heinous situation to change, mostly with more staff.

Their comments come after an Associated Press investigation uncovered that FCI Dublin has been nicknamed the "rape club" and that complaints by women and whistleblower employees have not only fallen on deaf ears, but that these people have also been retaliated against.

The tour also came on the same day that KTVU reported the story of Andrea Reyes, 34, who has come forward with an explosive new claim: Not only did a correctional officer have an inappropriate sexual relationship with her – but he also dug into her private medical records to uncover her mental frailties and then used those triggers to prey on her.

In an exclusive interview with KTVU, Reyes said that former correctional officer Ross Klinger obtained access to her private health files to manipulate her mentally as well as physically. Klinger has since pleaded guilty to having sex with three incarcerated women at the Dublin prison.

"I feel like he literally would pick the ones he felt were weak," Reyes said. "I believed him. I was alone and I was vulnerable." 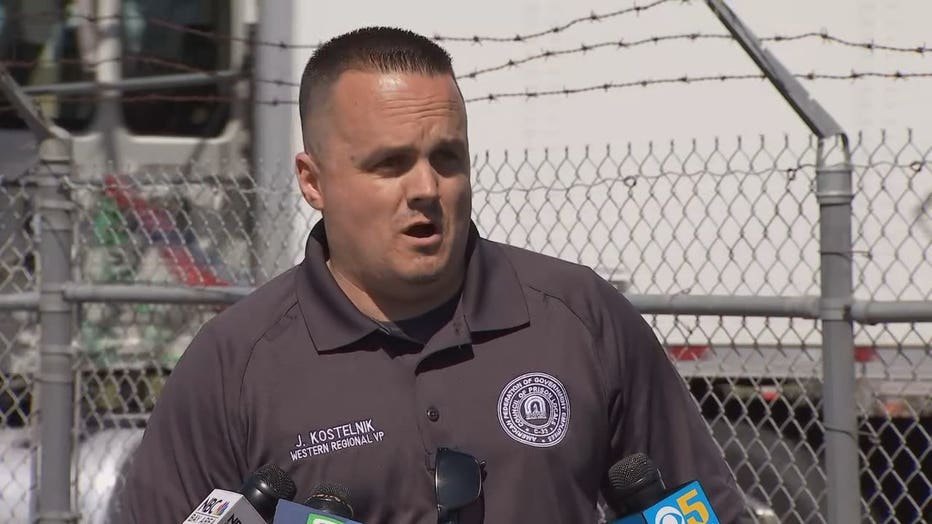 In addition to Congress, 100 groups – from Centro Legal de la Raza in Oakland and the ACLU in San Francisco –  have fired off a letter to the Department of Justice and the Attorney General's Civil Rights division, among others, demanding not only a deeper investigation into this prison, but also releasing women who have "survived staff abuse."

Among the other demands: Establish unmonitored lines of communication for incarcerated women to report staff misconduct to an independent body; ensure that officers accused of abuse cannot have any direct contact with incarcerated women; and immediately dismiss staff who are found to have abused incarcerated women.

At least one of those demands was addressed by the Congressional team.

Swalwell said that it would be "unacceptable" if officers who were accused of sexual misconduct were still working in the same facility as the woman who accused them  – they should at least be put on leave during an internal investigation.

Swalwell also noted that the Bureau of Prisons has used COVID as an excuse for many things, such as not being able to put up cameras, not allowing women to congregate and not allowing them educational access.

But that's a "disgrace," Swalwell said, adding that COVID can no longer be used as a valid excuse not to protect women's rights or try to rehabilitate them.

Associated Press reporters Michael Balsamo and Michael Sisak contributed to some background reporting in this story.

Lisa Fernandez is a reporter for KTVU. Email Lisa at lisa.fernandez@fox.com or call her at 510-874-0139. Or follow her on Twitter @ljfernandez