The actress thanked all nursing staff around the world amid the fight against COVID-19.

NEW YORK (AP) - New York Gov. Andrew Cuomo called face masks a sign of respect for others on a day the state reported 195 new deaths. Other data released Tuesday shows that nine out of 10 people arrested for coronavirus-related offenses in New York City have been black or Hispanic.

Warning that the state isn’t out of danger yet, Cuomo on Tuesday urged New Yorkers to wear masks out of respect for the nurses and doctors who have died to protect people from the pandemic, which he said had killed another 195 people.

During his daily briefing, Cuomo recounted a tense conversation about masks he had with a man while on a recent walk with his daughter. He said people should be aware that masks, which are worn to reduce the wearer’s chance of infecting others, are a sign of respect to everyone they walk past, as well as to workers pulling society through the outbreak.

New York requires people to wear face coverings when in close proximity to others in public. As people grow wearier of the extended lockdown, some complain that requirement infringes on individual liberty.

RELATED: 'Maybe you're not that bright': Larry David urges people stay inside during coronavirus pandemic 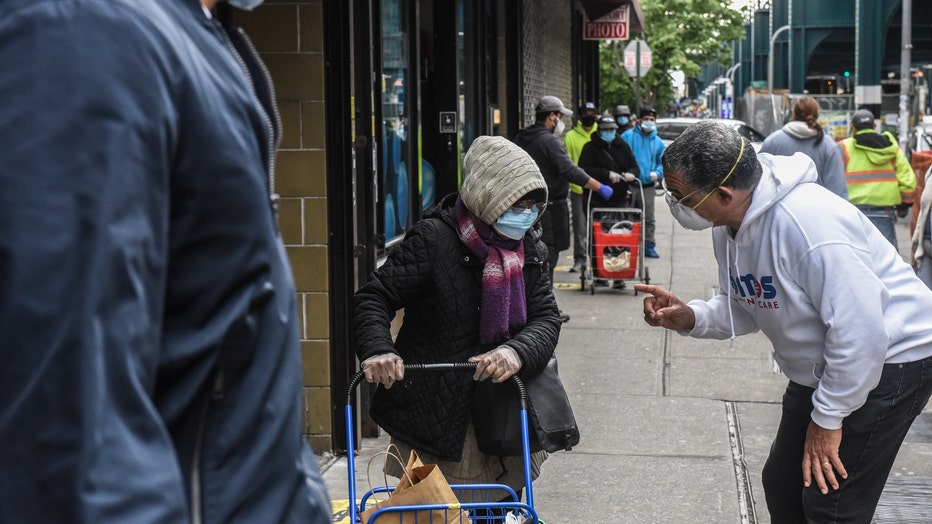 FILE - A person explains how the food line operates for food donated by SOMOS, in partnership with World Central Kitchen and Maestro Cares Foundation on May 11, 2020 in the Elmhurst neighborhood in the Queens borough in New York City. (Photo by Stephanie Keith/Getty Images)

Cuomo instead stressed “reciprocal responsibility” as some upstate areas prepare to start phasing in economic activity this week.

The 195 deaths recorded in New York are a jump from 161 the previous day, but still about a quarter of the highest daily tallies just over a month ago. Hospitalization rates also continue to decline.