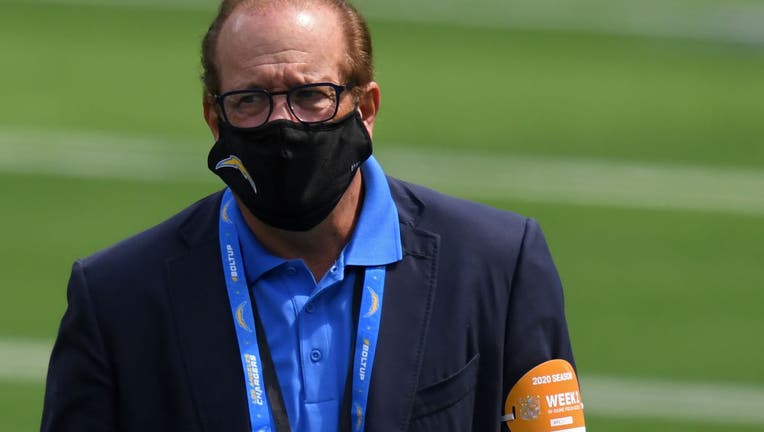 LOS ANGELES - The sister of Los Angeles Chargers controlling owner Dean Spanos is petitioning a California court to put one-third of the team’s ownership stake up for sale.

Dea Spanos Berberian filed a petition Thursday in Los Angeles County Superior Court contending that mounting debt from the franchise is creating an estimated yearly loss of at least $11 million for the family trust.

According to the petition, the trust had debts and expenses of $353 million as of Sept. 30. Nearly half of that ($164,778,931) is due to the trust’s investment in the Chargers. The trust’s stake in the Chargers makes up 83% of its holdings.

"The trust is so heavily concentrated in owning a minority stake in a professional football team that beneficiaries have no choice but to depend almost solely on the rise or fall of the team," the petition says. "Maintaining the status quo is not an option."

The filing includes a letter in which Dean Spanos said he would hire an investment bank that would allow any member of the family to sell their stake. Berberian says in the petition that would be too long.

"Every day that passes increases the risks that the charitable beneficiaries and the Spanos family legacy will suffer irreparable financial and reputational damage," the filing says.

Spanos, Berberian, Alexandra Spanos Ruhl and Michael Spanos each own 15% of the franchise with 36% managed by the family trust and the remaining 4% owned by non-family members. Spanos and Berberian were left as co-trustees of the trust following the deaths of Alex and Faye Spanos in 2018.

Alex Spanos bought the San Diego Chargers in 1984 and Dean Spanos took over managing the franchise in 1994.

Dean Spanos, Michael Spanos and Spanos Ruhl issued a statement saying operations of the team will be unaffected by the court filing and that they intend to contest the motion.

"Our parents, Alex and Faye, wanted the Chargers to be part of the Spanos Family for generations to come. For the three of us the Chargers is one of our family’s most important legacies, just as it was for our parents. Unfortunately, our sister Dea seems to have a different and misguided personal agenda," the statement said. "If Dea no longer wishes to be part of this family legacy, the three of us stand ready to purchase her share of the franchise, as our agreements give us the right to do."

Forbes valued the Chargers at $2.6 billion in its recent franchise rankings. The trust’s share could be worth nearly $850 million after Daniel Snyder recently bought the remaining 40.5% of his minority partner’s stake in the Washington Football Team for $875 million.

The franchise’s value is expected to increase after the NFL agreed to a new media rights deal that will bring in more than $10 billion per year beginning in 2023. The Chargers also moved into SoFi Stadium last year and expect revenue to increase once fans are allowed.