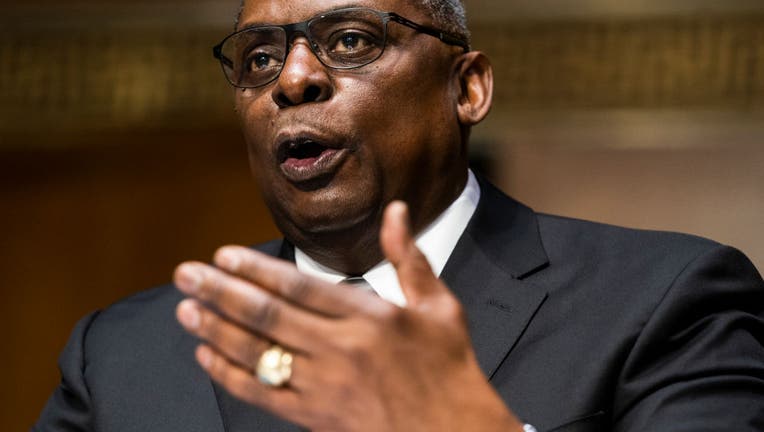 U.S. Army (retired) General Lloyd Austin testifies before the Senate Armed Services Committee during his conformation hearing to be the next Secretary of Defense on January 19, 2021 in Washington, DC. (Photo by Jim Lo Scalzo-Pool/Getty Images)

"I tested positive this morning for COVID-19," he tweeted Sunday evening, saying he was vaccinated and received his COVID-19 booster in October. "I requested the test today after exhibiting symptoms while at home on leave. My symptoms are mild, and I am following my physician’s directions."

Austin further said he will quarantine himself for the next five days per guidelines from the U.S. Centers for Disease Control and Prevention. He added that he plans to virtually attend key meetings.

Austin said he last had a meeting with President Joe Biden on Dec. 21, which was more than a week before he started showing symptoms. However, he was at the Pentagon on Thursday but said the staff wore masks and were socially distant.

More than a year after the vaccine was rolled out, new cases of COVID-19 in the U.S. have soared to their highest level on record at over 265,000 per day on average, a surge driven largely by the highly contagious omicron variant.

Dr. Chris Segrin of the University of Arizona talks with FOX Television Stations about how the COVID-19 pandemic altered human behavior.

New cases per day have more than doubled over the past two weeks, eclipsing the old mark of 250,000, set in mid-January, according to data kept by Johns Hopkins University.

The fast-spreading mutant version of the virus has cast a pall over Christmas and New Year’s, forcing communities to scale back or call off their festivities just weeks after it seemed as if Americans were about to enjoy an almost normal holiday season. Thousands of flights have been canceled amid staffing shortages blamed on the virus.

The picture is grim elsewhere around the world, especially in Europe, with World Health Organization chief Tedros Adhanom Ghebreyesus saying he is worried about omicron combining with the delta variant to produce a "tsunami" of cases. That, he said, will put "immense pressure on exhausted health workers and health systems on the brink of collapse."

The number of Americans now in the hospital with COVID-19 is running at around 60,000, or about half the figure seen in January, the CDC reported.

While hospitalizations sometimes lag behind cases, the hospital figures may reflect both the protection conferred by the vaccine and the possibility that omicron is not making people as sick as previous versions.

Public health experts will be closely watching the numbers in the coming week for indications of the vaccines’ effectiveness in preventing serious illness, keeping people out of the hospital and relieving strain on exhausted health care workers, said Bob Bednarczyk, a professor of global health and epidemiology at Emory University.

CDC data already suggests that the unvaccinated are hospitalized at much higher rates than those who have gotten inoculated, even if the effectiveness of the shots decreases over time, he said.

"If we’re able to weather this surge with hopefully minimal disruptions to the overall health care system, that is a place where vaccines are really showing their worth," Bednarczyk said.

WHO reported that new COVID-19 cases worldwide increased 11% last week from the week before, with nearly 4.99 million recorded Dec. 20-26. But the U.N. health agency also noted a decline in cases in South Africa, where omicron was first detected just over a month ago.