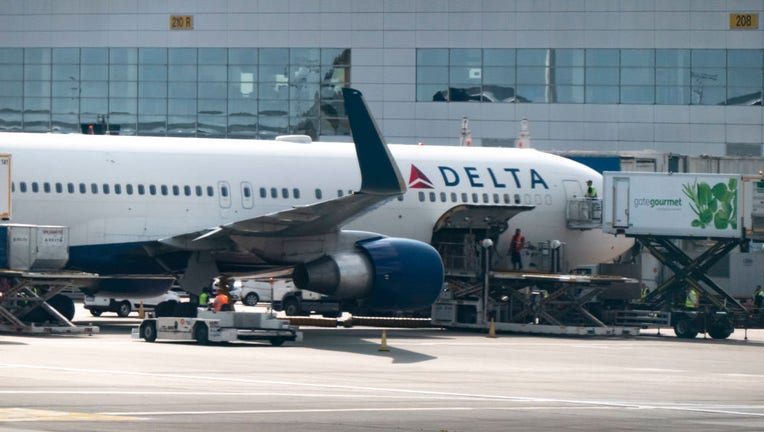 FILE IMAGE - A Delta Air Lines Boeing 767 wide body jet airplane as seen in front of the airport terminal, connected to the jetbridge. (Photo by Nicolas Economou/NurPhoto via Getty Images)

ATLANTA - With a busy Fourth of July holiday travel weekend expected, Delta is hoping to lessen the load in the skies by offering a waiver that allows customers to rebook their trip without paying change fees or fare differences.

Delta said it anticipates air travel volumes "not seen since before the pandemic" over the period of July 1 to Independence Day, which falls on a Monday and allows many to take advantage of a long weekend.

Busy airports, in addition to staffing issues, mean airlines are looking for ways to "minimize the ripple effect of disruptions," as Delta noted in its announcement.

The new waiver applies between July 1 and July 4 for anywhere in Delta’s network. Travelers can rebook their trip before or after the potentially challenging weekend travel days — with no fare difference or change fees — as long as customers travel between the same origin and destination.

The rebooked travel needs to happen by July 8, the airline said. It can be done via My Trips or the Fly Delta app.

"Waivers are typically issued only for a limited geographic area, reserved for weather events that are likely to cause widespread delays and cancellations, despite Delta’s best mitigation efforts," the airline said in a statement. "This waiver goes beyond Delta’s standard no-change-fee policy for U.S. domestic travel for customers with Main Cabin and premium tickets."

AAA warns drivers not to get behind the wheel hungover

Experts say driving hungover can be just as dangerous as driving after having a few drinks.

AAA explained in its 2022 Independence Day travel forecast that flying would be pricey given the going rate even for cheap tickets, which on average this year is $201 per ticket. In addition to expensive flights, air travelers have also faced delays and cancellations at various U.S. airports for weeks leading up to the Fourth of July.

Flight Aware, a company that provides flight tracking data, reported Tuesday that over 17,000 flights had been delayed with more than 2,000 flights canceled in the United States.

Bookings for air, car rentals, cruise, hotel, and tours are up 60% over 2021 for the top domestic destinations and up 252% for international, according to AAA data.