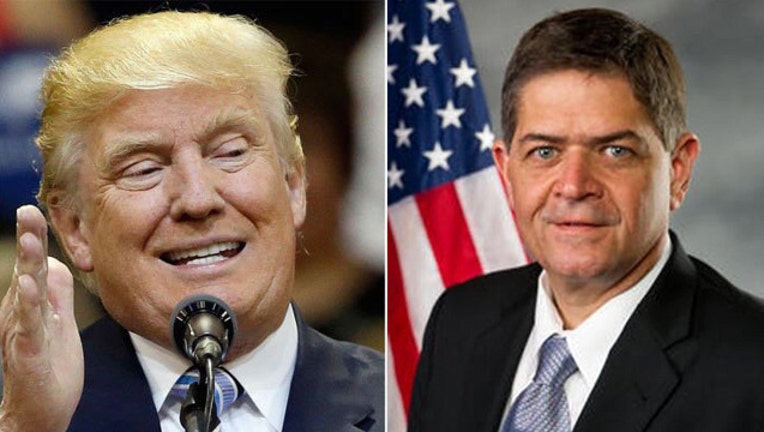 Vela, who represents a district in southern Texas along the U.S.-Mexico border, called Trump a racist, adding: "You can take your border wall and shove it up your ass."

WASHINGTON (AP) — A Democratic congressman said Monday that Donald Trump's criticism of a Latino judge overseeing a lawsuit involving Trump University shows that the presumptive Republican nominee for president is a racist and the candidate should take his border wall and "shove it up your ass."

Vela, who represents a district in southern Texas along the U.S.-Mexico border, called Trump a racist, adding: "You can take your border wall and shove it up your ass."

Trump University is the target of two lawsuits in San Diego and one in New York that accuse the business of fleecing students with unfulfilled promises to teach secrets of success in real estate, an allegation Trump has denied.

U.S. District Judge Gonzalo Curiel is presiding over the San Diego suit, and Trump has said Curiel's Mexican heritage means he cannot ensure a fair trial for Trump, who wants to build a border wall to keep people from illegally entering the United States from Mexico. Curiel was born in Indiana to Mexican-born parents — making him, in Trump's words, "a hater of Donald Trump."

Republicans have warned Trump to drop his attacks on Curiel, which they said have hurt the GOP's efforts to reach out to Latino voters.

Vela said in his letter that Trump's position with respect to the millions of undocumented Mexican workers who live in the U.S. is "hateful, dehumanizing and frankly shameful."

"If I had to guess, your own business enterprises either directly or indirectly employ more of these workers than most other businesses in our country," he told Trump in the letter. "Thousands of our businesses would come to a grinding halt if we invoked a policy that would require 'mass deportation' as you and many of your supporters would suggest. That is precisely why the Republican-leaning U.S. Chamber of Commerce agrees that these workers deserve a national immigration policy that would give them a pathway to citizenship."

The Trump campaign did not immediately respond to a reporter's requests for comment.

Trump promises to build a great wall along the 2,000-mile U.S.-Mexican border and make Mexico pay for it. Some 650 miles of border fencing now sits on the border, including roughly 15-foot tall steel fencing in many urban areas that is designed to stop or slow those trying to cross the border on foot.

Vela said he would rather "tear the existing wall to pieces."

While there's no doubt that Mexico "has its problems," it is also a U.S. neighbor and third-largest trading partner, Vela said. The U.S. Chamber of Commerce has documented that trade with Mexico accounts for at least 6 million jobs in the United States, he said.

"Why any modern-thinking person would ever believe that building a wall along the border of a neighboring country, which is both our ally and one of our largest trading partners, is frankly astounding and asinine," Vela said.

Taking aim at Trump's penchant for personal insults, Vela said Trump should not "dismiss" him as "just another Mexican," noting that his great grandfather came to the U.S. in 1857 — well before Trump's ancestors arrived in the U.S.