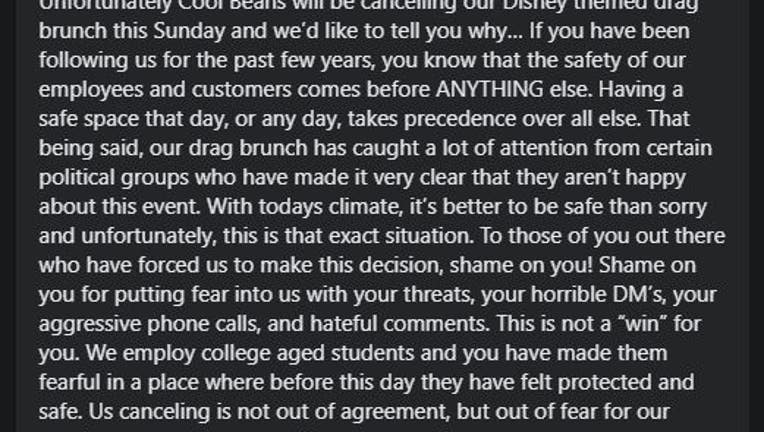 DENTON, Texas - A Denton bar and grill has canceled its Disney-themed drag brunch as a precaution after getting threats.

Cool Beans Bar and Grill was set to host the event Sunday, but it was canceled after they reported getting "horrible DM’s," "aggressive phone calls, and hateful comments."

They added that the event has gotten attention from "certain political groups."

The bar and grill said the decision on the cancelation was made because of safety reason, explaining: "the safety of our employees and customers comes before ANYTHING else."

They also added: "Us canceling is not out of agreement, but out of fear for our employees, performers, and customers safety."

Last month, protesters and counter-protesters got in heated exchanges outside a "drag brunch" in Roanoke.

Roanoke police said they were aware of the protest ahead of time and brought extra officers and resources to increase security.

The event was called "Barrel Babes Drag Brunch," which the location described as "similar to a variety show with professional drag artists lip-syncing, dancing and performing comedy routines."

Other similar events have drawn protests in North Texas and across the U.S.