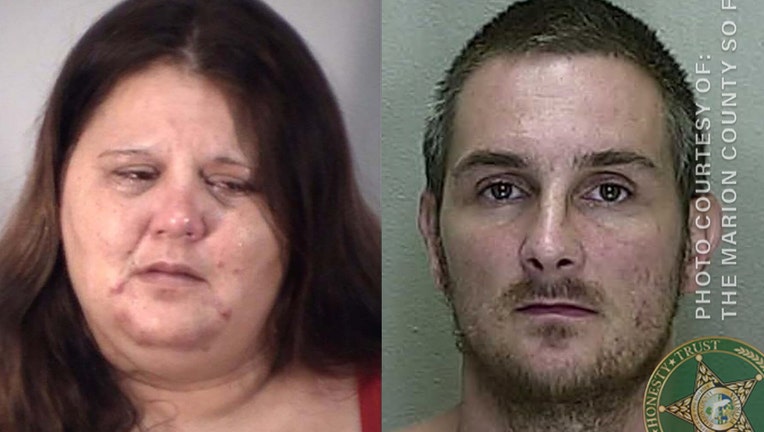 MARION COUNTY, Fla. - Two Florida parents are in jail after deputies say their 2-year-old child died of a fentanyl overdose.

The Marion County Sheriff’s Office said that Joseph Tierney and Jalynn Davis were arrested on Tuesday for Aggravated Manslaughter of a Child in connection with the death of their daughter.

They said that on June 13, 2021, deputies responded to a Umatilla residence in reference to a 2-year-old girl who was unresponsive. Deputies and paramedics administered CPR to the victim and she was transported to a hospital, where she was pronounced deceased.

An investigation was said to be launched into the death of the 2-year-old.

BREAKING NEWS ALERTS: Download the FOX 35 news app for breaking news as it happens and more

In August, they said that detectives received the autopsy results. The 2-year-old's cause of death was determined to be fentanyl toxicity. Her stomach contents tested positive for fentanyl.

Detectives said that the investigation into the girl’s death revealed that Davis sold fentanyl and that Tierney was an active user of fentanyl. Probable cause was developed that the parents were criminally responsible for the toddler’s death. They said that they brought the child to a known drug location and failed to protect her from the fentanyl present at the location.

"For years, law enforcement has been battling the opioid epidemic here in Marion County, throughout the United States, and at our country’s borders. The senseless death of this innocent child is the ultimate tragedy, and it should serve as a reminder of why we must continue our fight to keep opiates out of our communities," Sheriff Billy Woods said. "Everybody should know that if you or somebody you know uses drugs and wants to get clean, our community has resources available to help you."

Sheriff Woods added, "But let me be perfectly clear, if you are using drugs or selling drugs, and if somebody overdoses or dies as a result, me and my deputies will do everything we can to hold you accountable to the fullest extent of the law."